Patience is a virtue… especially when judging a TV series. My feelings about Netflix’s 19th-century crime drama Alias Grace, which debuts today, see-sawed back and forth as I made my way through all six episodes. There’s a lot to like about it — it’s gorgeously shot and quietly compelling, with a potent lead performance from Sarah Gadon — but at times, it gets sluggish and overly gloomy. Stick with it, though, because the sixth and final episode is truly remarkable, weaving all of its disparate narrative strands together for a thoroughly satisfying finish. 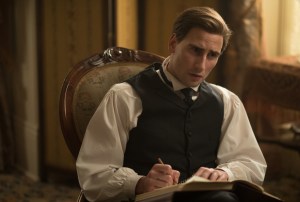 When we first meet Irish immigrant maid Grace in 1859 Canada, she is in prison for a sensational double murder, gawked at by the public as an infamous “murderess.” She’s visited by handsome psychiatrist Dr. Jordan (Wolf Hall‘s Edward Holcroft), who could help set Grace free if he writes her a positive report, so she recites for him her long, grim life story, leading up to the murders. Along the way, we learn about her horrific crime in tantalizing bits and pieces — but we’re never quite sure if we can believe the tale Grace is telling us.

The result is a little bit Downton Abbey, with Grace and her fellow maids cleaning up after wealthy aristocrats; a little bit Handmaid’s Tale, with the systematic oppression of women — Alias Grace is also based on a Margaret Atwood novel — and a little bit Silence of the Lambs, with Dr. Jordan carefully peeling back the layers of Grace’s criminal psyche. Even the cinematography is reminiscent of The Handmaid’s Tale, with warm sunlight pouring in through windows, and having writer Sarah Polley and director Mary Harron handle all six episodes helps set a consistently elegant tone throughout, with flowery narration from Grace and literary quotations preceding each episode. 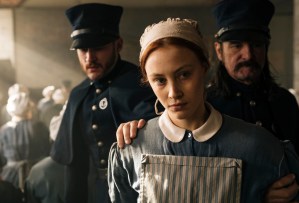 Grace’s life story is a harrowing one, though, and tough to watch at times, with a parade of men and women looking to use her for her own purposes, starting with her drunk and abusive father. There’s a casual brutality and misogyny on display here, with women’s complaints chalked up to “hysterics,” and also a strong streak of lower-class rebellion, with crushing poverty everywhere and bitter servants resenting their filthy rich masters. (Basically, it was terrible to be poor, and it was terrible to be a woman — and to be a poor woman? Hoo boy.) With women today still having to fight just to be treated as equals, Grace has an exceptionally timely “topple the patriarchy/eat the rich” edge to it that elevates it above typical costume-drama fare.

Plus, Gadon’s performance is an absolute revelation. She was pleasant enough as James Franco’s love interest Sadie in the Hulu miniseries 11/22/63, but she ups her game substantially here, employing a flawless Irish accent and projecting a haunting blankness as Grace. Is she guilty? Is she crazy? Grace speaks plainly, hardened by years of accusations and prying eyes; she has nothing left to lose, and doesn’t waste time on pointless formalities. It’s a fascinatingly intricate piece of acting, and helps carry Alias Grace — even when the story wanders. 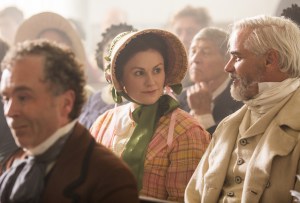 Grace’s tale does get achingly slow at times, with lots of noble suffering and monotonous cruelty, and certain plot points are hit three or four times when once would do fine. None of the other characters are as richly drawn as Grace, either. Most are hateful villains, like housekeeper Nancy, played by True Blood‘s Anna Paquin, who hires Grace to work alongside her but quickly grows jealous of her. Crime-drama fans trying to “solve” the central mystery will likely be left disappointed, too: Because of Grace’s stress-induced amnesia and unreliable narration, we can never know the real truth of her crime, even when she tells it.

But seen in full, and judged not as a conventional crime drama, but rather as a psychological character study, Alias Grace is a rousing success. All the narrative meandering in the early episodes pays off in the dazzling final chapter of Grace’s story, with Gadon taking her already terrific performance to stunning new heights. Like Dr. Jordan examining his patient, I wasn’t quite sure what to make of Alias Grace as I watched… but eventually, I fell completely under its spell.