The Breakfast Club meets X-Men with a splash of Stranger Things thrown in, Marvel’s Runaways is the richest, best-realized Marvel drama of the new TV season.

Premiering Tuesday, Nov. 21 (with the first three of 10 episodes) and based on the comic books by Brian K. Vaughan and Adrian Alphona, Runaways follows a pack of once-inseparable teens — Alex Wilder, Nico Minoru, Karolina Dean, Chase Stein, Gert Yorkes and her sister Molly Hernandez — one year after the death of Nico’s sister Amy. In the immediate wake of that loss (and in part fueled by mysterious funeral-day happenings), the “BFFs” abandoned that second “F” and went their separate ways. Chase now hangs with the very jocks he and Alex used to mock and Nico has gone Goth, for example, while Karolina has sipped some of the Kool-Aid being served by the Church of the Gibborim, which is led by her former TV-star mother, Leslie. 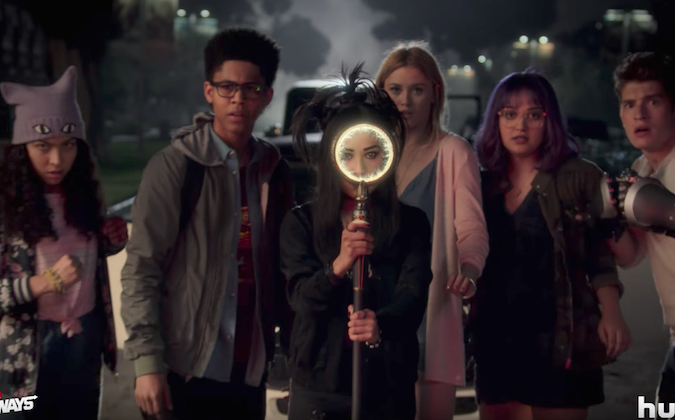 The anniversary of Amy’s death prompts Alex to try to get the gang back together, if only for one night. Though that folly is dismissed by almost everyone in quick succession, a series of unrelated events manage to steer the sextet to a common location, where they happen to witness to an unspeakable truth about The Pride, the elite parents group populated by their respective, well-off folks. (Let’s just say the Church of the Gibborim occasionally demands more than a tithe.)

Oh, the kids have their secrets, too. Karolina as part of her religion wears a bracelet that she can’t remember ever taking off; Molly is going through a stage of puberty that Judy Blume never warned us about; and Gert is revealed to have a special connection to some… thing.

And yet what’s most notable about Runaways is that the first episode plays like a straight, engaging teen drama, with few out-of-this-world twists on display. Shepherded by Gossip Girl‘s Josh Schwartz and Stephanie Savage, it feels more Freeform than The CW — in a way, it’s the show Kyle XY might have been with a greater scope. Episode 2 opens the curtain a bunch, revisiting the pilot from The Pride’s POV, while the other two episodes made available to critics get to exploring the distinct dynamics between both the kids (who pair off to investigate different aspects of what they stumbled upon) and the ‘rents (who are subject to infighting, infidelity, incursions and… glowy nether regions?).

The cast is solid across the board, and somewhat remarkably there’s not a clunker among the kids. To single a few out: Lyrica Okana is showcased early as Nico suffers through tense anniversary times in her house, Ariela Barer brings a fresh spin to riot grrl Gert and Virginia Gardner is fittingly luminous as Karolina. Gregg Sulkin has pathos as Chase the heart-throb (but whose?), Rhenzy Feliz is a bit (if appropriately) reserved as Alex and Allegra Acosta nicely captures Molly, the youngest group member’s, coming-of-age. Of sorts.

Among The Pride, everyone is well-served in the early episodes seeing as none of these marriages are idyllic. As Leslie, Annie Wersching (24) gets to play a variety of notes as megachurch guru, patronizing wife (to Kip Pardue) and dutiful (?) daughter, while the pairings of James Marsters (Buffy)/Ever Carradine (Major Crimes), Brittany Ishibashi (Emily Owens M.D.)/James Yaegashi and Ryan Sands (The Wire)/Angel Parker (The People v. O.J. Simpson) each deftly tackle complicated unions. Playing Gert’s bohemian folks (who adopted the tragically orphaned Molly), Kevin Weisman (Alias) and Brigid Brannagh (Army Wives) winningly deliver comic relief, with the latter evoking a young Annie Potts. Marsters’ Victor Stein may came off as a brute of a genius, and Ishibashi’s Tina Minoru is on paper a “tiger mom,” but no one here is exactly as they seem. Everyone is full of surprises.