Just as John Diggle gets better acclimated to his new role as Green Arrow, multiple threats — including a familiar-ish one — will surface over the coming weeks.

In this Thursday’s episode (titled “Reversal” and airing on The CW at 9/8c), Diggle will have Black Siren to quiet — and it turns out she is not alone. Beyond that, the arrival of Ricardo Diaz (based on DC Comics’ Richard Dragon) is on the horizon. And all this is going on as Dig tries to keep his illicit drug therapy on the down low.

David Ramsey shared with TVLine a look at the secret-keeping and big introductions ahead.

TVLINE | What was your first reaction upon learning you would be legit “suiting up” for a stretch?
I was hoping they would actually make another suit! Every time I get into an Arrow suit it is a new suit, and I like that. There’s a little bit of sexiness to the suit, Matt. It’s kind of a sexy suit.

TVLINE | I was going to say, you’re pulling it off, man.
I was looking for forward to the fittings and getting into the leather again

TVLINE | Were you surprised, pleasantly or otherwise, by the duration of your time in the hood? Stephen [Amell] said there’s a “maturity” in the show really following through on that twist.
I think that’s a great way of putting it. I was surprised. There was a realistic sentiment to me taking over. The fan base was mixed, and so was Team Arrow, so the sentiment within the fiction was realistic. Diggle was compromised and immediately Rene called him on it and went to Oliver, and this was not Diggle picking up where Oliver left off. He has some faults, and I’m glad. As human and “to the ground” as you can make a show about about a man fighting crime with a bow and arrow [Laughs], we’ve made it that way. Diggle had problems in the field, people questioned his leadership… and then there is reversal of the Oliver/Diggle relationship, with Oliver now kind of taking on that role of offering sage advice. I thought it hit all the right notes. 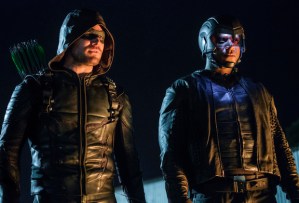 But yes, I was surprised, pleasantly, that they really committed themselves to giving me even a different fighting style. This is something Bam [supervising stunt coordinator James Bamford] and I have always talked about, that Diggle is a military-trained guy so there’s not a lot of elliptical, roundhouse [moves]. This guy goes straight forward, breaking bones, trying to end the fight. We wanted to show that difference between the way those two fight as well.

TVLINE | Diggle is secretly “juicing” to get past his injury. What sort of complications can we expect from that?
Big-time complications. You’re seeing Diggle in a different way, right? Diggle has always been kind of the bastion of integrity — I mean, this man wanted to go to prison over the guilt he felt over the Canary’s death and his brother’s death. He’s been the model of morality. And now all that stuff comes into question. I think it’s a good arc for Diggle and a good arc for the team, because what’s he’s doing will affect the whole team and his family. This will have a ripple effect that will be felt throughout the first part of the season.

TVLINE | Do you think his guilt level rises with each passing episode he doesn’t come clean to Oliver about his compromised situation?
I think that Diggle is a man of mission, and once the mission takes hold, it’s “whatever you have to do to complete it.” I say that with a caveat that Diggle has always been the one saying, “You do whatever you have to do, but once you cross that line of morality, maybe you want to talk about how these choices affect the mission.” But Diggle takes this [Green Arrow] mantle very, very seriously. He takes Star City very, very seriously. Diggle had a great line many years ago that went, “Secrets are like weights — the more you have, the harder it is to move.” And for Diggle it becomes less about his guilt and more about, “I have to have these drugs to continue the mission.” So we’re going to see a Diggle that becomes someone we haven’t really seen, in the sense that his moral compass gets comprised. You would think that, as your question implies, he is a man who’d feel some guilt, that it starts to haunt him, but it’s more, “I have to continue this charade.”

TVLINE | What sort of threat will the Ricardo Diaz character (played by Kirk Acevedo) present when he shows up in a few weeks?
Hmmm…. I almost said something that would give it away but… Ricardo Diaz ends up being someone very important to Diggle specifically. His thread plays out on a relationship with Diggle particularly.

TVLINE | Ricardo is described as “an ex-con who is set on taking control of Star City’s criminal underworld.” How will he differ from Season 5’s Tobias Church? Was Tobias more of a thug?
He was a street-level thug. There is a street element to Ricardo, but Ricardo is much bigger than Tobias Church, his tentacles are much longer. Tobias Church was really street-level. 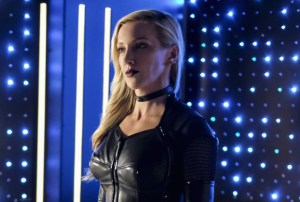 TVLINE | And what is Black Siren up to this week?
It’s all on Cayden James, man! It’s [Helix boss] Cayden James and Black Siren this week. You get to find out, “Who is Cayden James?” Mmm-hmmm. So that’s happening. And also, Felicity feels as if she can handle Cayden James and this revelation without the team, so there’s a moment for her at the end of this that’s helped by Oliver. Again, you have Oliver playing this position of almost Diggle, to the whole team, in a lot of ways for the next several episodes. It’s a much more mature Oliver — not just with what he’s doing with his son, but giving Felicity the key last week…. And that extends further this week as he helps her realize she needs the team to handle the Cayden James revelation.