Tom Hanks‘ David S. Pumpkins is back and doing his own thing — this time in animated form as part of a Saturday Night Live Halloween special. Any questions?

The iconic character and his B-boy skeleton sidekicks (voiced by Mikey Day and Bobby Moynihan) were all present in NBC’s aptly titled David S. Pumpkins Animated Halloween Special, which aired on Saturday in place of a new SNL. It began in live-action form, with Pumpkins making a formal introduction.

“How’s it hanging?” he asked at the audience at home. “I’m David Pumpkins, and I’m going to scare the heck out of you.”

In the cartoon that followed, Pumpkins was transported to a small suburban town where he met an 11-year-old boy named Kevin and his sister Dotty, who were on their way to pick up a pumpkin at Mr. Higgins’ Pumpkin Patch. There, Dotty chose the worst-looking gourd of all, which turned out to be a magical pumpkin that morphed into David S. Pumpkins’ haunted elevator. Upon his arrival, Kevin had plenty of questions — none of which Pumpkins or his lackeys managed to answer during an impromptu sing-along. He then offered to take Kevin and Dotty home in his Pumpkin Mobile, which inexplicably was not a pumpkin, but a strawberry.

Later, David S. Pumpkins and the skeletons accompanied Kevin (dressed up as a random businessman named Carl Branley) and Dotty (dressed up as an Abraham Lincoln taco) while they trick-or-treated. Along the way, Kevin was stopped by his school crush Paige, who informed them that a fabled ghost known as The Raincoat Man had escaped his haunted house and stolen candy from all the kids in the neighborhood. Kevin then promised everyone that with the help of David S. Pumpkins, he’d get all of their candy back.

Kevin & Co. made their way to the haunted house. Raincoat Man wasn’t there, but the school bullies were. In order to scare the bullies into giving them all the candy they had stolen, David S. Pumpkins and the skeletons threatened to sing a song, and that was enough to get them to forfeit all the confectionary goods. Using a little bit of magic, David S. Pumpkins used flying jack-o-lanterns to get the candy back to its rightful trick-or-treaters. He and the skeletons then rode the subway back to the pumpkin patch, where they said their goodbyes and reentered the elevator from which they came. 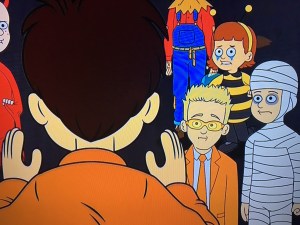 Among the highlights from the special…

* Why yes, that was Game of Thrones‘ Peter Dinklage voicing older Kevin.

* Among the trick-or-treaters whose candy was stolen? None other than Kevin “Can a bitch get a donut?!” Roberts!

* When retrieving the stolen candy from the bullies, David S. Pumpkins spotted a box of raisins, and in rage, tossed it straight towards the moon.

Was NBC right to go all-in on David S. Pumpkins? Grade the SNL animated special via the following poll, then hit the comments.