Season 2 of Stranger Things is set two years before The Fly made a pop-culture catch phrase of “Be afraid… be very afraid,” but it sure would have come in handy in the creeptacular “Chapter Four: Will the Wise.”

As the hour began, the protagonist of the title was a whole lot worse for wear following his harrowing “Chapter Three” episode. Though Joyce’s sketch of the thing she’d seen in his Halloween video, coupled with her assertion that she believed his visions were real, got her son to confide in her about the monster that he’d felt as much as seen, he was still exhibiting some out-there symptoms. For one thing, he was chilly to the touch yet refused to warm up in the tub. “He likes it cold,” he said ominously. For another, as he explained to Hopper, he now had stuck in his head “old memories… only they’re not my memories.” Also, they were “now memories” of growing and spreading and killing. Come again?

In hopes of figuring out what Will was trying and failing to explain, Joyce suggested that he draw what he couldn’t put into words. Only after he’d churned out pages and pages of what the chief first mistook for “scribbles” did he and Joyce realize that the black lines in his drawings connected. When the pages were all put together like a puzzle, they depicted a massive network of vines, like the ones that ran through the Upside Down… and like the ones that Hopper ultimately discovered growing in a tunnel beneath one of the “poisoned” pumpkin patches. (Ruh-roh.)

And if you think that’s scary — and it was — it was nothing compared to what Dustin found when he got home from school after a day of pretending to help search for Dart. His adorable pollywog had shed its skin, broken free of its terrarium, eaten Mom’s cat and — egads! — now had the telltale starfishy head of a Demogorgon!

IN OTHER DEVELOPMENTS | Eleven, it turned out, had a temper that was as unsettling as anything in the Upside Down. During an epic argument with Hopper — during which he attempted to punish her by withholding Eggos — she accused him of being “like Papa” and used her powers to ram a sofa into him (for starters!). As she cleaned up afterward, she discovered her protector’s hidden stash of files on Hawkins Lab… files that included a picture of her mother, to whom she reached out using the old blindfold trick. As you’d expect, the revelation left El utterly shattered. Not only did she have a mom, but Hopper had lied to her about it. (And friends, it is well-known, don’t lie.) 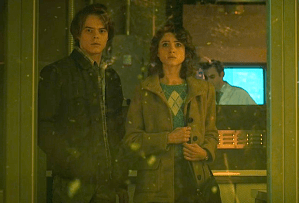 Meanwhile, Jonathan and Nancy cut class to meet Barb’s parents. Or so we at first thought. What they were really doing was trying to get apprehended by the baddies from Hawkins Lab. Easy peasy, as Bob would say. The kids’ master plan? Let Owens run off his mouth about the lab’s “abundant mistakes,” among them Barb’s death and Will’s trauma, and get the whole thing on tape. Again — weirdly? — easy peasy. Finally, Billy took a break from ragging on Steve to notice Max fighting with Lucas about the guys keeping secrets from her (when they wouldn’t have from El). The psycho’s response? To offer to “protect” her from her friend in a way that left her far more upset than even the argument had.

So, did you predict that Dart was a baby Demogorgon? Are you afraid of what El might do with the knowledge that Hopper lied to her? Grade the episode in the poll below, then hit the comments.