Ever since Grey’s Anatomy introduced Nathan back in Season 12, we’ve heard the legend of how his two-timing had led to the “death” of Owen’s sister. Well, in Thursday’s “Danger Zone” (9/8c, ABC), we actually flash back to 2007 to see how the story unfolded for real. “It’s like a big Oprah ‘Aha!’ episode,” says Abigail Spencer, who plays Megan. “What you think went down, because everybody’s been alluding to it for years and years, is not the thing that actually happened.

“I hope that viewers will be like, ‘Oooh!'” she continues. The way characters have previously behaved “makes a lot more sense [afterwards], because you’re like, ‘Oh, that’s why Nathan… ‘ ‘Oh, that’s why Owen… ‘ Everything becomes an ‘Oh!'” 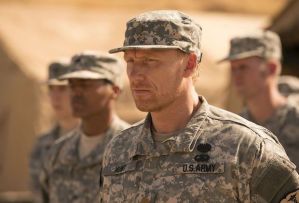 In the wake of the revealing hour, which takes place partly in the past, partly in the present, the reunited couple won’t be the only ones who have closure. Though “it kind of sets up a whole new life for them… it’s a big moment for everybody to get very real about their relationships,” previews the Timeless star. In particular, “Megan’s a real catalyst for Owen to deal with his life. She says a lot of things that he needs to hear. He’s been shape-shifting for a lot of different people, and I don’t know if he really knows what he wants. Megan’s return has set off a tremor that’s going to be a larger earthquake in his life.

“And I don’t mean just with Amelia and his marriage,” she adds. “I think it’s going to be really interesting to see Owen from here on because of Megan being alive and what [a shock like] that really does to someone. It forces them to ask, ‘Are you living your life to the fullest?'”

As for the reluctant third leg of the Megan/Nathan/Meredith triangle, “there’s a completion [with Grey] and a lot of grace between the three of them. You’re watching people be adults,” says the actress, who goes on to suggest that, after her ordeal, Megan can’t help but be mature. “You don’t spend 10 years being kidnapped and held in captivity to not have perspective. She comes back and is like, ‘This [dilemma] is not a thing. We can work through this.'”

So, are you looking forward to rewinding to see how it all fell apart between Nathan and Megan? Hit the comments.