As much as the Will & Grace revival might make us feel like not a day has a passed since the hitcom ended its original run, a whole lot of days have gone by, a point driven home hilariously by Thursday’s episode, in which Will and Jack realized that, in the gay community, they’d become the answer to the question, “Who’s your daddy?” 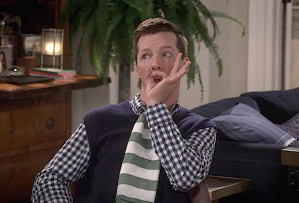 At first, Will loved it, since Jack was aging, in his pal’s words, “like a meth-head mother of nine,” whereas, on a recent night out at the Cockpit, he himself had been told by 23-year-old Blake (Dear Evan Hansen’s Ben Platt) that he was hot “like an anchorman.” Finally, Jack became so upset by Will’s retelling of the story for Grace’s sake that he couldn’t finish his breakfast — well, at least not at their apartment. So he took it across the hall when he stormed out.

Before heading back to the Cockpit that evening, Jack paid a visit to Karen, who armed him with everything he’d need to pass for the twentysomething that he no longer was: magnets so powerful that they were “guaranteed to take the Mitch McConnell out of anyone’s neck” and a full-body compression garment. “For a fat baby?” asked Jack, stunned by its tininess. “For my fat baby,” she replied, patting his tummy.

While the magnets and body stocking made it difficult for Jack to “introseduce” himself around the bar — and led to some feats of physical comedy that are sure to earn Sean Hayes another Emmy — Will dealt with the downside of trying to date someone half his age. From the start, Blake was annoying as hell, hashtagging Will’s ability to cook as “so Throwback Thursday.” But then, he went and dissed vintage Madonna, even after his date noted that “Borderline” had gotten him through a bad breakup in ’94. “I was born in ’94,” replied Blake (all but daring me to reach through the TV and smack him). 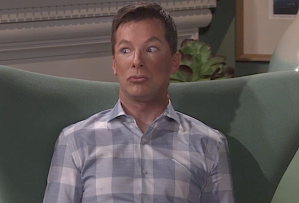 During a quick hallway tête-à-tête with Jack, who needed pruning sheers to get out of his body stocking before his young hook-up arrived from the bar, Will got reassurance that it wasn’t creepy to date someone so much younger. That is, Jack thought it was OK till he heard that Blake had slammed Madge. Then, he decided the kid “should be beaten with a VHS copy of Evita!”

Eventually, Will arrived at a deal-breaker: Blake’s cheerful ignorance of gay history. When he admitted that he didn’t know the difference between Stonewall and Stonehenge, Will couldn’t resist schooling him (even though Blake’s “boner [had] already called a Lyft”). By the episode’s end, it didn’t seem like Blake had learned much, except maybe that there had been “no such thing as a fagosaurus.” But at least Will got to go all Julia Sugarbaker on him. “The minute we forget what we went through to get here is the minute it could all be taken away,” he said, adding, “and that will be the night the lights go out in Georgia.”

As the episode drew to a close, Will and Jack compared notes. “Mine left the apartment screaming like Vera Farmiga in The Conjuring,” said Jack, having taken off the makeup counter’s worth of cosmetics that had made him less baby-faced than Baby Jane-faced (see photo above). Will just wanted someone with a shared history, someone with whom he could communicate in shorthand, someone like… Were he and Jack thinking they should be together? No, they insisted. They were just thinking “that early Madonna’s the best” before they spontaneously began dancing to “Borderline.” 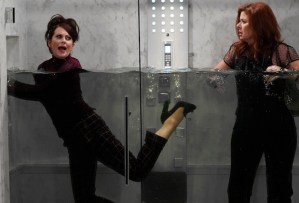 While all this was going on, Karen, inspired after maid Bridget did as Rosario (unseen)  suggested and asked for a raise, turned around and requested a pay hike from Grace — so that, like her own servants, she could have a little dignity. During their ensuing argument, they got trapped in Karen’s new voice-activated shower… with the shower turned on, of course, and water quickly rising. The only way out was for Karen to utter her and Stan’s safe word… which she couldn’t remember, never having had to use it. Finally, Karen got Grace so angry that she stopped panicking about drowning and realized that her assistant had long used little tricks to keep her calm. Naturally, it was but a nanosecond later that they accidentally discovered that Karen’s safe word — her “sexual buzzkill” — was “Grace Adler.”