Nearly a decade after MTV’s TRL took its final request, the iconic series returned for a new generation of music lovers. Sort of.

Monday’s relaunch opened with a somber message in response to the mass shooting — the deadliest in our nation’s history — that occurred overnight in Las Vegas. The show’s hosts, along with Ed Sheeran and other guest artists, assembled to tell the viewers that their “hearts and prayers go out to the victims and their families … and even though our hearts are hurting right now, we’re going to keep going and lift each other up.”

Additionally, viewers were told that “now is the time to take action” before being directed to EveryTown.org, a non-profit organization dedicated to strengthening gun laws and ending gun violence nationwide. You can watch the video in full above.

(Editor’s note: This opening gave me flashbacks to when the original TRL aired in the wake of the attacks on the World Trade Center in 2001. I so vividly remember then-host Carson Daly offering words of comfort to young viewers, attempting to lift the spirits of a nation in turmoil. This didn’t have quite the same effect, but I’m not about to compare and contrast well-intended post-tragedy sentiments.)

Following an outdoor performance by Migos, host DC Young Fly and guest DJ Khaled entered the show’s newly refurbished Times Square studio (“This is bigger than my momma’s house! Lord, have mercy!”) before returning their attention to the act of terrorism in Vegas, reading tweets from Rihanna and Jennifer Lopez.

That’s when things started to fall apart: The show experienced its first run of technical difficulties during the subsequent moment of silence — which didn’t exactly qualify as “silence,” considering you could hear crew members communicating over their microphones — followed by what I can only describe as a sermon from DJ Khaled.

“It’s important that we all pray more,” he said. “God is great. There’s a lot of things going on in the world right now. We have to spread more love right now. … Let’s pray for our people in Vegas, Mexico, Houston Florida, Puerto Rico — everywhere worldwide.” He then shared a few more thoughts on love: “If you don’t got love around you, tell ’em to leave the building. And if they don’t leave the building, you leave the building. … I got a rule in my house: no dark clouds in my house.”

Did I mention he was seated on a giant throne? Like, one too big to fully fit in the frame? Enjoy: 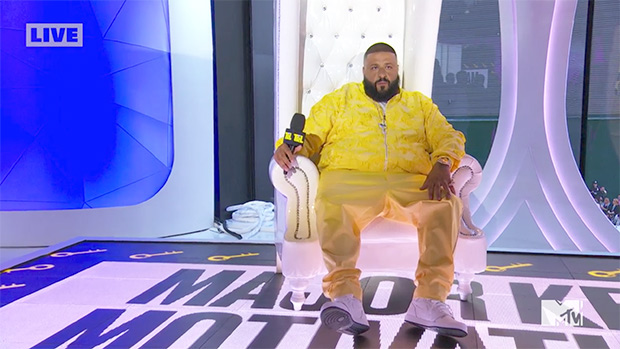 “I don’t think you understand,” DC Young Fly told him. “You’re making history! You’re the first guest!” to which Sheeran replied, “Sweet. Thanks.”

Various other guests flowed in and out of the studio, including Riverdale star Lili Reinhart, but none of the interviews or games were as memorable as the technical difficulties that plagued them. For example: Prior to Reinhart’s interview, DC Young Fly threw it “outside,” only for the camera to cut to a seemingly off-guard correspondent in the studio who introduced Reinhart. The awkward amount of time it took for the CW actress to actually enter the studio — in addition to the sight of frenzied cameramen scurrying in and out of frame — were representative of the show’s overall lack of organization. (The clip of Riverdale‘s season premiere also started playing before Reinhart had a chance to set it up.)

And if you tuned in to see some music videos — you know, the reason TRL was invented in the first place — you were out of luck. In lieu of videos, the show had a running “playlist” of songs that its guests added to throughout the show.

But don’t just take my word for it. Here are a few tweets from other unsatisfied customers:

Omg this TRL is so awkward

TRL was kinda all over the place but I saw Ed Sheeran. Happy Monday!

TRL has to do better.. all these delays 🤦🏽‍♀️

TRL: “thanks for watching”
Me: pic.twitter.com/Fpcih4wQ7q

Did MTV’s highly anticipated revival live up to your expectations? Will you “come thru” again tomorrow? Am I being too nitpicky over the technical glitches and overall lack of focus? Grade Monday’s premiere below, then drop a comment with your full review.