THE PERFORMANCE | We’re still not happy with Ray Donovan for saddling Abby with terminal cancer, but damn if Malcomson’s tour-de-force performance isn’t providing us with one helluva silver lining. And that was especially true in Sunday’s episode, which found Abby at her most emotionally and physically vulnerable as the disease continued its lethal progression.

A remote ice-skating rink provided the setting for what would be Malcomson’s strongest work on the show to date, as Ray (Liev Schreiber) “bullied” his pale, withered other half into lacing up and going for a spin. A childlike joy awakened in Abby as she held on to her hubby’s hand and reminisced about their ice-skating days of yesteryear in Boston. When Abby’s feeble body began to give out, cutting their impromptu pairs routine short, Malcomson’s eyes conveyed every beat of her character’s confusion, denial and despair. But it was when the anger began to set in that the Deadwood vet truly began to soar.

Lashing out at a universe that would give her cancer and not her murdering, philandering husband, Abby seethed to Ray, “Running around your whole life killing people, hanging off cliffs or whatever the f–k it is you do — you’re probably going to live until your 100 years old. I’ve hardly ever done anything. Except raise your kids. Look after you and your goddam family. And I’m gonna be dead in my 40s… This is some Godless f–king bulls–t is what this is.”

Malcomson’s pitch-perfect delivery of writer Miki Johnson’s crushing monologue hammered home the injustice of Abby’s predicament, leaving us heartbroken and infuriated. And praying for a miracle. 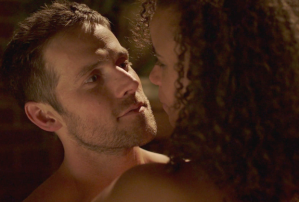 HONORABLE MENTION | An achingly tender love story unfolded amid the bloody, apocalyptic battle that was Midnight, Texas‘ Season 1 finale, and much credit for that successful dichotomy goes to Dylan Bruce. As Bobo, the silly-named, sweet-as-hell pawn shop proprietor, Bruce built a slow-burn affection for Fiji with a season full of adoring glances, earnest declarations of love and unflagging devotion to stick by the witch’s side. But holy goddess, can that man turn up the heat or what? When it became clear that sleeping with Fiji might help vanquish a demon (yeah, just go with it), Bruce transformed his aw-shucks character into the Sexiest Man in Midnight. He tempered Bobo’s ardor with a wide smile and whispered reassurances that Fiji knew how to control her power. Oh, and when they discussed the first-date dinner Fiji would’ve made under ideal circumstances? Forget those twice-baked potatoes: Bruce’s performance was delicious in and of itself. 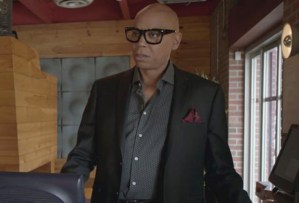 HONORABLE MENTION | Don’t you just love when you get exactly what you’re hoping for out of a guest star? From the moment we spotted RuPaul Charles in the trailer for Broad City‘s fourth season, our expectations were high, and the two-time Emmy winner did not disappoint in the role of Marcel, a bitchy, bespectacled manager at a Manhattan eatery specializing in sushi and shade. Sure, the part sounds a little on-the-nose, but Charles actually took it in some exciting directions, tip-toeing into absurdity without going full-on Cheshire Cat. His trademark camp blended magnificently with the show’s over-the-top energy, especially when callously dismissing one of his lessers — including his own estranged son, whom he ditched for a party at Andy Cohen’s place. And so we have but one question for the Powers That Be: Shantay… Can Ru stay? 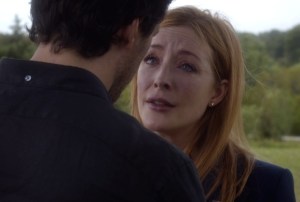 | As CBS’ Salvation hurtled towards its freshman climax and the ark was impulsively populated, an emotionally charged moment — starting with, “Wait, you’re not staying?” — sneaked up on us as Jennifer Finnigan‘s Grace realized that she and Darius would be parting ways at this critical juncture in Earth’s history. “We need you in there. You can’t just abandon us like that,” she argued in the face of Darius’ Huntington’s disease disclosure. But that attempt at cold pragmatism dissolved away, Finnigan’s body language changing and eyes dampening, as the heart of the matter became clear. “I want you in there…. I want you,” she declared. “I want to be with you, I don’t care where.” As if that and embrace that ensued wasn’t heartbreaking enough, we got a callback to one of the duo’s first exchanges, as Darius amended his observation that Grace was not “extraordinary in an ordinary way” but a “born leader.” Deep impact, indeed.