“You know, I’m starting to smell something,” Detective Zac Posen declared during Thursday’s Project Runway critiques. “I don’t like what’s going on.”

He arrived at this conclusion (of sorts) after Tim Gunn told the judges that the reason Claire’s look appeared “unfinished” — complete with a pair of way-too-short shorts that Heidi Klum did not want to see on the streets — was because she got caught up helping Shawn with her look. He did, of course, note that helping another designer doesn’t go against any official rule.

And the judges weren’t the only ones raising their eyebrows over the twins’ collaborative efforts. During one of her confessional interviews, Kenya said, “Shawn can’t work or create anything if her sister doesn’t help her. Claire has a good shot at making beautiful clothes, but as long as she comes to the rescue of her sister, I don’t think she can make it.”

Fortunately for Claire, a couple of looks — which were supposed to be streetwear designs that look good on social media — were more offensive to the eye than her model’s exposed cheeks. Check out Margarita’s look (right) and Samantha’s design (left), the latter of which resulted in an elimination: 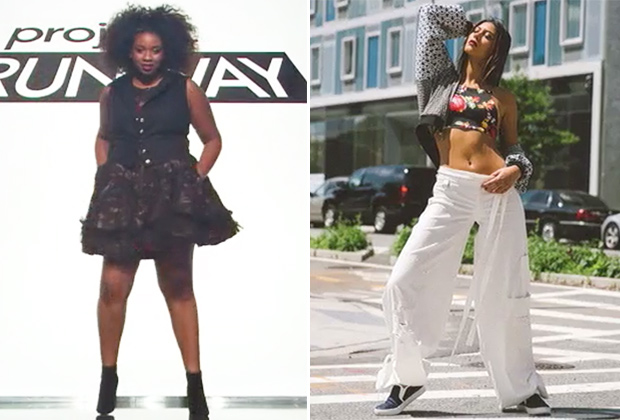 The judges hated both looks for different reasons, but they agreed that Margarita has a broader range, while Samantha is too “one note.” I’ll admit that I was pretty sad to see Samantha go — even if I agree that it’s her time.

On a more positive note, Kentaro was the winner of this week’s challenge! Here’s his winning design: 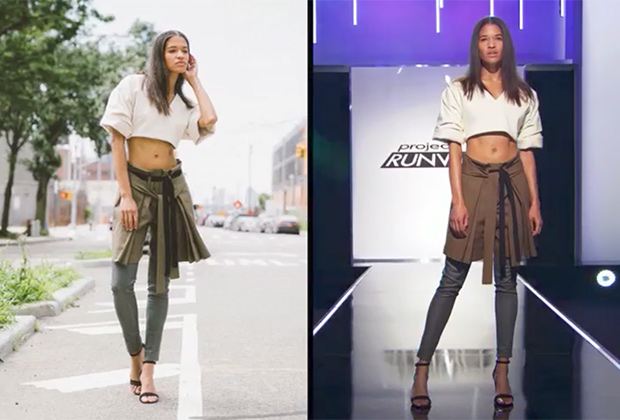 Even with the brief questioning of the twins’ work ethics, this was a relatively low-drama episode of Project Runway — though I suspect that’ll change as Klum and her fellow judges continue to thin the herd.

Your thoughts on this week’s episode? Samantha’s elimination? Whatever’s on your mind, drop it in a comment below.