Keri Russell was unwittingly by my side at the start of the most painful chapter of my life.

The wretched afternoon in question is chronicled in my new memoir, Spoiler Alert: The Hero Dies, which is available beginning today at your local bookstore and all major online retailers. The tome delves into my 13-year relationship with my late husband, Kit Cowan, who — as followers of mine on social media and regular readers of TVLine know — died in 2015 after an 11-month battle with a rare and merciless form of colorectal cancer.

Although flashbacks to the early days of our goofy, amorous courtship are sprinkled throughout the book, it’s the final year of Kit’s life that dominates the narrative. On several occasions during that stretch, my TVLine duties awkwardly intersected with the personal crisis I was facing at home. And that was certainly the case on that aforementioned afternoon in February 2014 with Keri and Matthew Rhys.

The following excerpt from Spoiler Alert: The Hero Dies both revisits that inauspicious day and opens a small window into my Smurf- and soap opera-obsessed childhood. For the larger window, you’ll need to get the book. Which I really hope you do. Not only am I extremely proud of it, but I’m excited for you to get to know the tough, silly, dreamy, sarcastic, stylish, smart, tempestuous, gifted, sentimental, impulsive, thrifty, foul-mouthed, Gargamel-y, Ab Fab-ulous Kit.

The next day, Monday, Kit reached out to a colorectal specialist referred to him by his primary care physician and made an appointment for Wednesday—the same day I was scheduled to visit the Brooklyn set of The Americans, the FX drama series that starred my aforementioned Felicity crush Keri Russell.

In the twelve years since Felicity went off the air, I had remained fairly tight with many of the key players, particularly series co-creator J.J. Abrams (aka the guy responsible for my graduation-scene cameo), star Scott Foley (aka the guy who directed my episode and was responsible for leaving me on the cutting-room floor, a decision that has haunted him ever since, mostly because I throw it in his face whenever I see him), and, last but not least, Keri. I was very much looking forward to seeing her on Wednesday. Kit was aware of this and therefore instantly vetoed my offer to reschedule it so I could accompany him to his appointment. And I didn’t fight him on it.

I probably should have, because all I could think about on that Wednesday was Kit. His appointment was at 2 p.m., and much of my time on the Americans set was spent looking at my watch and texting Kit to remind him to call me with a full report the second he left the doctor’s office. I arrived on the Brooklyn soundstage at around 1 p.m. and spent the first ninety minutes observing a scene between Keri and TV hubby Matthew Rhys (who I knew from covering his previous TV series, the ABC drama Brothers & Sisters) in their characters’ living room. I typically loved seeing how the TV sausage got made, but today I was disconnected from the experience. My heart was with Kit and my eyes were on my phone, waiting for some kind of communication from him. I was praying, purely for selfish reasons, that I’d hear from him before it was time for me to sit down and interview Keri and Matthew. The optimistic part of me fantasized about getting a positive report from Kit and then turning my reunion with Keri into something of a celebration.

At around two-forty-five, I got tired of waiting.

“Update, please,” I texted him.

Within seconds, he wrote back, “Just got out. Hold the line.”

I found a quiet area away from where Keri and Matthew were shooting their scene and took Kit’s call. 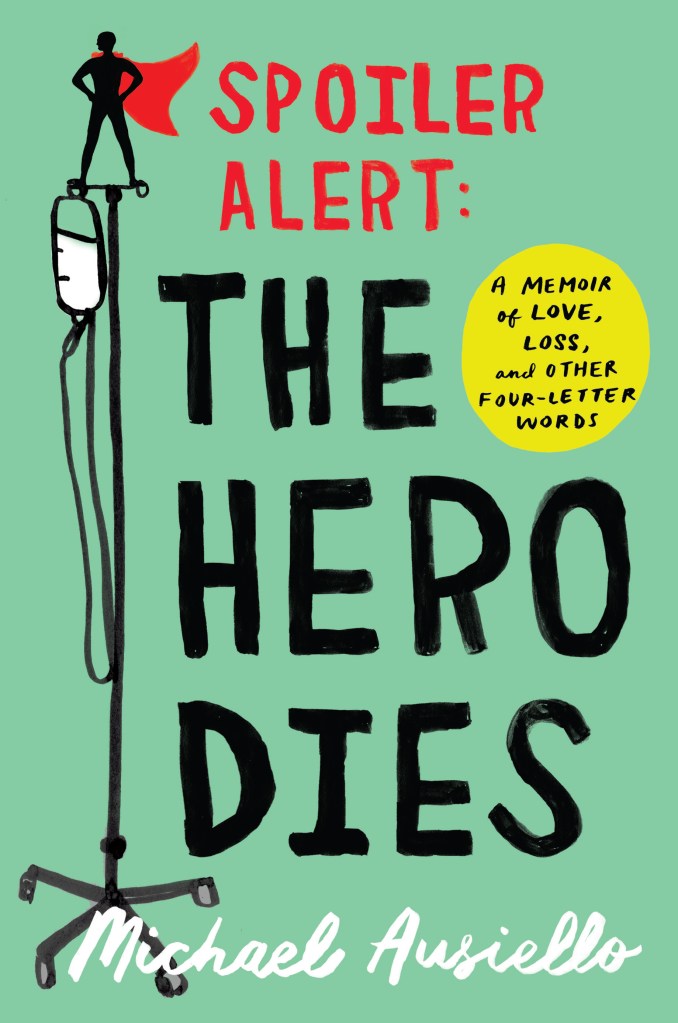 “They found something,” he informed me. “But the doctor said there are a hundred things it could be other than cancer.”

“They found a growth?” I clarified.

“The rectal exam was not fun,” he said. “But I’m OK. I’m going to treat myself to some retail therapy now. I will see you tonight when you get home.”

I hung up with him, and before I had time to process all of this new information, Lana Kim, The Americans’ publicist, was in my face.

“Michael, Keri and Matthew are ready for you.”

Lana escorted me through the show’s surprisingly spacious living room set into the dining room nook, where Keri and Matthew were waiting for me. Their faces lit up when I entered, and they both stood to embrace me. We quickly caught up, they thanked me for schlepping out to Brooklyn to visit them (after I only half-jokingly reminded them that I didn’t do outer boroughs for just anyone), and then I pulled out my questions, placed my tape recorder on the table in front of them, and lightly, playfully grilled them about what was in store for their characters, Elizabeth and Philip, in Season 2.

Good thing I was recording their answers, because I wasn’t listening to a word they were saying. All I could hear was the voice inside my head going, “It can’t be happening again.”

Nearly twenty-six years ago to the day, my mom returned home from the doctor’s with my dad and informed me and my brothers, Peter and David, that a growth had been discovered inside her throat. A subsequent biopsy revealed it was cancer. She would be dead within a year.

My mom was my whole world.

She had a heart as big as Texas and a laugh that could fill a room until it was bursting with joy. And she wasn’t just an animal lover; she was the kind of animal lover who would have long conversations in the kitchen with her beloved parakeet, Tweety. Then, while cooking dinner, she’d make up silly songs with random, funny lyrics.

Around seventh grade, I was pretty much fused to my mom’s hip. That included shadowing her every summer at the mortgage credit check company she co-owned with my father (I was paid in Smurfs) and serving as her Sunday grocery-shopping assistant. My duties included bundle-carrying and distracting cashiers while coupons for items we hadn’t purchased were deducted from our bill—remember, these were the crazy, anything-goes, pre-scanner days!

My mom also shared my love of soaps. Unfortunately, since I was a child of the Dark Ages—a time before VCRs, never mind DVRs—school proved a rather daunting obstacle to my daytime TV watching. But it was not an insurmountable obstacle. If the truancy cops had paid a little more attention to my absentee records, they’d have noticed that all of my illnesses coincided with pivotal episodes of Days of Our Lives. Bo and Hope’s wedding? I was home with a cold. The climax of Stefano DiMera’s evil prism plot? I was nursing a relentless cough. The death of Roman Brady? Nasty stomach bug.

In those instances when feigning sickness wasn’t an option (or my performance was not up to snuff), I dragged out the portable tape deck, left the television on all day, and just recorded the audio. It was hardly an ideal option, but desperate times called for desperate measures.

The arrival of the VCR improved my quality of life exponentially. My mother and I developed a reliable system by which she would manually press record on the VCR every day at 1 p.m., which conveniently was right around the time she returned home from work. (You did not want to be in our house on the afternoons when I got home from school and a fresh episode of Days was not waiting for me on the VCR, the result of my mom running late at work or forgetting altogether. The tension could be cut with a knife. Thankfully, my mom’s success rate was very high.)

My dad, however, was embarrassed by my love for “Love in the Afternoon.” Whenever I got grounded, it wasn’t my outdoor privileges that he revoked; it was my soaps. Daytime and nighttime.

“Thank God for my mother!” is a thought that crossed my mind quite often, but especially when my father took my soaps away. She always managed to get him to cut back on my sentence—a one-week ban often became a one- or two-day ban, and even then, Mom would record the shows for me behind his back.

Through it all, my mom was surrounded by a cloud of smoke. Oh, man, did she smoke—as much in a day as every character on Mad Men would in a season, combined. Morning, noon, and night, she had a cigarette in her mouth. On airplanes, in cars, at work—there was never a bad time to take a puff, as far as my mom was concerned. She would buy them by the carton, and if she ran out (or came close to it), she would send me to the corner store to pick her up a pack. (I couldn’t help but feel like her drug mule.) Deep down, though, I knew that it wasn’t good for her. I feared she would die of lung cancer. One night, I even ran downstairs crying after having a nightmare that she had died.

But I nonetheless worried that the most important person in the world would be taken away from me.

And in the end, she would.

The eleven-month period between her diagnosis and death was a dark, debilitating stretch. The emotional roller coaster of fear, hope, sadness, disappointment, and ultimately, abandonment haunts me to this day. Because I spent so much time with my mother, I was given a bird’s-eye view of the entire ordeal—I even accompanied her to her daily radiation treatments. And as I held her hand in the emergency room on December 27, 1988, I looked on as she opened her eyes, glanced at me, and let out a barely audible “Michael.” It was the last word she would ever speak.

This couldn’t be happening again.

I considered confiding in Keri and Matthew what I was going through, if only to hear them offer me a comforting, if illusionary “Everything will be OK.” I ultimately decided against it. I was there for professional reasons, not to dump a lifetime’s worth of cancer baggage on them. So after wrapping up the interview, I packed up my tape recorder, hugged them goodbye, and ventured back into Manhattan, anxious to see Kit and find out more about today’s visit. And maybe uncover something that would reassure me that it wasn’t happening again.