Sofia Carson is going from playing one villain’s offspring to another.

The Descendants star — best known to Disney Channel fans for her portrayal of Evie, the daughter of Snow White’s Evil Queen — will lend her voice to an upcoming episode of Marvel’s Spider-Man on Disney XD, TVLine has learned exclusively.

Carson will play Keemia, the estranged daughter of Flint Marko (aka Sandman). In addition to being “smart, cunning and vengeful,” Keemia also possesses superpowers. Check out an exclusive photo of Carson’s character in action below: 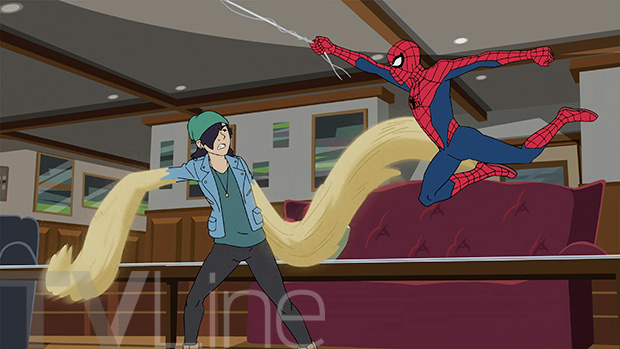 And she isn’t the first Descendants star to cross paths with Spider-Man; Cameron Boyce (aka Carlos de Vil) recently lent his voice to an episode, playing a young scientist named Herman Shultz.

Will you set your alarm to catch Carson’s Marvel debut? Drop a comment with your thoughts below.