The Bold Type wrapped up its freshman season on Tuesday with its central trio boldly going into the unknown in their personal and professional lives.

Jane finally worked up the courage to tell her boss Jacqueline that she was leaving her comfortable job at Scarlet for a new gig at start-up Incite.

Meanwhile, Sutton impressed Oliver enough to earn a seat at a fashion show. As for her love life, it’s complicated: After her ex Richard confessed that he should have fought harder for her, Sutton realized that, try as she might, she didn’t have feelings for Alex and broke things off. Later on, Richard and Sutton shared a moment in the elevator that seemed to imply a reconciliation is imminent.

And then there’s Kat, who made the boldest move of all by getting on a plane to meet up with Adena in Peru. But has she left behind her home, friends and job for good? Below, executive producer Sarah Watson addresses that question, as well as Jane’s “scary decision” and Sutton’s uncertain relationship status. The EP also weighs in on the show’s renewal prospects and shares her plans for a potential Season 2. 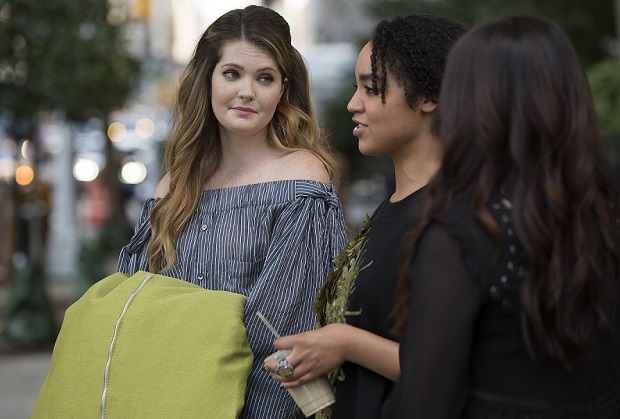 TVLINE | Kat has left the country, Jane is moving on to a new job. What does life — and by extension, the show — look like for the girls when they’re not all working together and hanging out all the time?
That’s a question we’ll answer if and when we get a Season 2. We’ve seen these girls be best friends because they work together, and it’ll be interesting to see what happens when we see them be best friends on a different plane and a different level.

TVLINE | Did Kat officially quit before she left?
No. Is this just a vacation? Is she just flying out for the weekend? Did she up and leave her job? We wanted to leave a lot of questions for Season 2. All I can say for sure is she’s with Adena in Peru right now. But we don’t know what that will mean long-term. Maybe the spinoff will be Kadena in Peru? 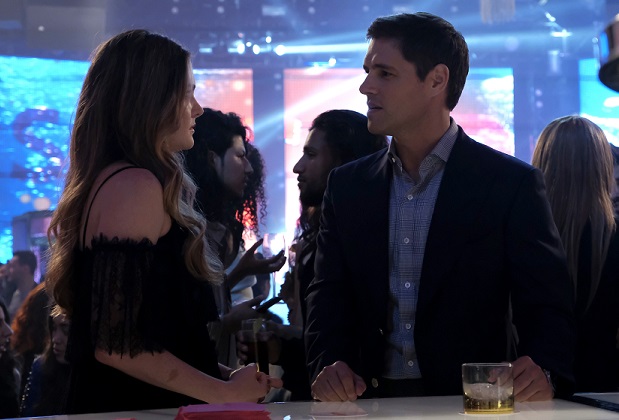 TVLINE | We didn’t actually see what happened between Sutton and Richard after the elevator doors closed. But can we take those little smiles to imply that they’re going to try to work things out?
We can interpret it as hope. We talked a lot in the writers’ room about, “Do we want to see behind those elevator doors or not?” We, ultimately, decided [to] leave it on a little bit of a mystery.

TVLINE | It seems like if they want to have a future, the only way to go is to disclose their relationship, no?
I think so. But are they ready to? Is that where they want to go? We’ll figure that out if we get a Season 2.

TVLINE | Did Sutton have any real romantic feelings for Alex, or was it just a rebound?
I think she wanted to have feelings for him. We’ve all been there, where we have a friend who’s just this wonderful guy, and is there for you in every way, and constantly has your back, and you’re like, “Oh, my God, I would be the luckiest girl alive if I had feelings for him.” She really did want to want to be in that relationship, and let herself get swept up in it for a moment, and ultimately, the feelings just weren’t there. 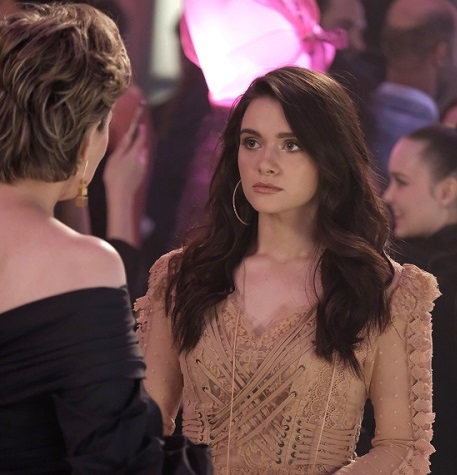 TVLINE | I had my doubts about whether Jane was really going to go to Incite even after she told Jacqueline about it. How resolved is she in that decision?
We were going back and forth up until the day we shot that. Ultimately, we felt like we needed to see her go through with the scary decision. It felt right for the character. Whether she stays at Incite, or whether something happens and she comes back to Scarlet in Season 2, I don’t know yet. I just wanted to see her do the scary thing.

TVLINE | Jane, who really wants real love, is the one character who doesn’t have a romantic cliffhanger in this episode. Can you talk about the decision to focus on her career rather than her love life in the end?
The Jane/Pinstripe stuff in [last week’s episode] was so great, and it felt so cliffhanger-y, that it felt like anything we could do in [the finale] would just be giving it short-shrift, and it would feel tacked on. And because, ultimately, this is a show about these girls at work, her relationship with Jacqueline is kind of the biggest ship for Jane. In order to give that relationship the due it needed, we had to put her love life on simmer.

TVLINE | How are you feeling about the show’s renewal chances?
I feel hope. I feel like Sutton with the elevator doors closing on her. [Laughs] I feel a glimmer of hope, but I still don’t know what happens when the doors close.

TVLINE | Are there certain issues or character arcs that you would like to tackle in a potential Season 2?
I want to get to know the guys a little bit better. For Season 1, it was all about the girls and their friendship and getting to know them. It would be great now in Season 2 to get to know the guys, even outside of their relationships with the women. I also want to go inside Jacqueline’s personal life and her home life a little more. We, intentionally, this first season kept Jacqueline pretty guarded… We wanted to keep her a mystery because we felt like that made her more powerful. But now I feel like if we were to get a Season 2, we’ve earned the right to go a little bit more behind the curtain.

TVLINE | This is on my wish list, and maybe it’s something you also want to explore next season: I really want to meet the girls’ parents.
We talked about it, and we actually did break an episode where we meet Sutton’s mom. We just felt like we hadn’t earned it yet. We were still getting to know the girls as the girls. That’s something I would love to do in Season 2. And I want to meet Jane’s dad and her brothers. All three of them have the potential to have really interesting parents and really interesting dynamics with their parents. We just felt like we didn’t want to sacrifice closet time for parents in Season 1.

Bold Type fans, what did you think of the finale? Grade it via the poll below, then hit the comments to back up your pick!