The chung-chung is out there: Annabeth Gish will guest-star on an upcoming episode of Law & Order: SVU, TVLine has learned exclusively.

The X-Files alum will play a defense attorney in Episode 3 of the NBC drama’s forthcoming Season 19. The hour is shooting now and is slated to air in October.

The case in which Gish’s character is involved? A man is castrated and left for dead, leading Olivia & Co. to three female suspects with possible motives.

In addition to playing X-Files‘ Agent Reyes, Gish’s recent TV credits include Halt and Catch Fire, Code Black, Scandal and Rizzoli & Isles. She joins a Season 19 guest cast that includes Brooke Shields, Will Chase and Amy Smart; in addition, Philip Winchester will bring his Chicago Justice character, Peter Stone, to mix it up in the Manhattan District Attorney’s office.

In addition, the long-running procedural recently released its key art for the upcoming season. Take a look at the image below, then hit the comments with your predictions for Season 19. 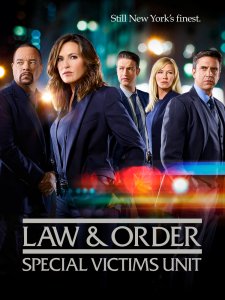