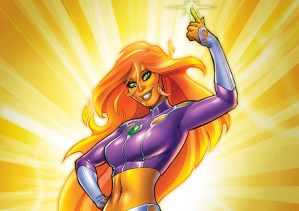 The character, also known as Koriand’r (photo at right), hails from a warrior planet and seeks asylum on earth. That’s how she’ll come into contact with the Titans. Per the official character description, Starfire is “no-nonsense” and “take-no-prisoners.” She also can fly and shoot energy bolts.

Executive producers Akiva Goldsman, Geoff Johns, Greg Berlanti and Sarah Schechter will bring the up-and-coming superheroes to life in 2018, in a series that will stream exclusively on a DC-branded direct-to-consumer digital service. Written by Goldsman, Berlanti and DC Entertainment Chief Creative Officer Johns, Titans will follow Dick Grayson as he emerges from the shadows to become the leader of a fearless band of young, soon-to-be superheroes recruited from every corner of the DC Universe.

The live-action series was in development at TNT until January 2016; the move to DC’s digital service took place this past April. In August, Australian actress Tegan Croft was cast as Raven, a powerful empath and daughter of a demon.