The broadcast networks have nearly 20 shows debuting this fall, including ABC’s Ten Days with Kyra Sedgwick, NBC’s look at Brave heroes and CBS’ chronicles of a Young Sheldon. To help you prep for it all, TVLine is offering First Impressions of the not-for-review pilots.

THE COMPETITION | ABC’s Dancing With the Stars, NBC’s The Voice, CBS’ Kevin Can Wait/Me, Myself & I/Superior Donuts and The CW’s Valor

RELATED Read Our First Impressions of ABC’s Ten Days in the Valley, CBS’ S.W.A.T., The CW’s Dynasty, NBC’s The Brave and More

THE SET-UP | When young Andy Strucker and his sister Lauren (played by White and Lind) are outed as mutants, they and their parents must go on the run from Agent Jace Turner (Bell) and his Sentinel Services team. To that end, they must entrust an underground mutant network whose members include Thunderbird, Polaris, Eclipse and Blink.

THE FIRST IMPRESSION | The fall’s most-anticipated new drama (per a TVLine poll), The Gifted grabs you from go, marrying an instantly engaging premise with some rather slick visual effects. (The “invisible” barriers that Lauren thrusts into people’s paths, 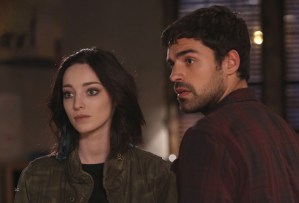 as well as Blink’s handmade teleportation “portals,” are rendered in especially cool ways.) The dynamics and powers within the mutant underground are quickly and clearly established, as are the relationships among the Struckers. Yes, Marvel’s X-Men are referenced… as having gone off the grid, thus leaving these non-marquee mutants to fend for themselves against formidable, perhaps-reprehensible government foes.

The pilot alone packs at least two significant plot twists, including one that closes the hour before the screen abruptly (and frustratingly!) cuts to black.

The cast is across-the-board solid, no easy feat with an ensemble this size and with uniformly telegenic resistance members that could have easily come off as interchangeable, yet emerge as distinct and relatable.

THE TVLINE BOTTOM LINE | It’d be great to see Fox have an unqualified freshman hit here, but those Dancing “stars” and Voice singers famously suck up a lot of the night’s oxygen. Even so, leading out of an increasingly buzzy Lucifer, Fox should see an improvement over Monday’s previous Gotham/Lucifer combo.

Watch the trailer for The Gifted, then vote in our poll below.