The next time you’re feeling glum about your romantic life, feel free to cue up these exclusive teasers from SundanceTV’s upcoming miniseries Liar to remind you that sometimes singledom is the safer bet.

The six-part psychological thriller tells the story of Laura Newell (Downton Abbey‘s Joanne Froggatt), a school teacher fresh out of a relationship who reenters the dating scene with Andrew Earlham (Forever‘s Ioan Gruffudd), a surgeon who is the father to one of her students. They get together for a night that sets in motion a series of accusations and lies that take over their lives.

In the teaser videos below, we see Laura and Andrew at the beginning of their evening, when everything is going great, everyone is smiley, and there’s no hint of the massive trouble heading their way. Go ahead and watch, then scroll down for more:

Liar was created, written and executive-produced by Harry and Jack Williams (The Missing). It premieres Wednesday, Sept. 27, at 10/9c. Scroll down to take a good look at the exclusive poster below (click on the image to see in full), then hit the comments: Are you planning to tune in to Liar? 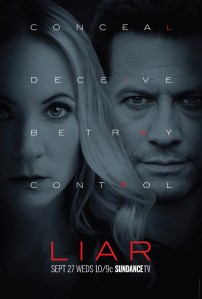