The Hulu comedy returned Tuesday with three episodes, beginning with Billy and Julie interrupting CBS’ live broadcast of Sunday in the Park With George, which has been retitled Bazinga in the Park With George and stars the cast of The Big Bang Theory. Billy’s sign reads “Keep your Bazinga! out of my park,” and it’s perfect.

Not to worry, though. While Enemy No. 1 is now the Chuck Lorre sitcom, the premiere does manage to squeeze in at least one reference to “a loose Kevin Spacey.” The first episodes back also have plenty to say about the current presidential administration — and clearly take place in an alternate reality where Obamacare has been repealed and Trumpcare is worse than anyone could have possibly imagined.

For starters, Julie is in need of antidepressants ahead of Marylin’s Passover seder, and is forced to go to a Quiznos that doubles as a free clinic to get a prescription. As it turns out, Trump has dismantled the Department of Health and made anti-vaxxer Jenny McCarthy’s blog the law of the land. In Episode 2, “Strike Rat,” a cash-strapped Billy is willing to fake being turned straight by a Mike Pence gay conversion therapy kit to get his hands on $6,000. Unfortunately for him, the money is paid out in “straight bucks” — aka a Tommy Bahama gift card.

As a result of their Big Bang protest, Julie and Billy are sentenced to probation, and are left to pick up trash on Nathan Lane Memorial Roadway. (As you’ll recall, Mr. Lane is no longer with us.) They’re also required to visit a children’s hospital dressed up as clowns, where they encounter a young man they think is poor and dying of cancer. When he then tells them that he’s just in for a broken leg and is actually rich, Billy signs his cast, writing “so proud you’re gay,” before the two of them leave. This will soon come back to bite Billy in the you-know-what. 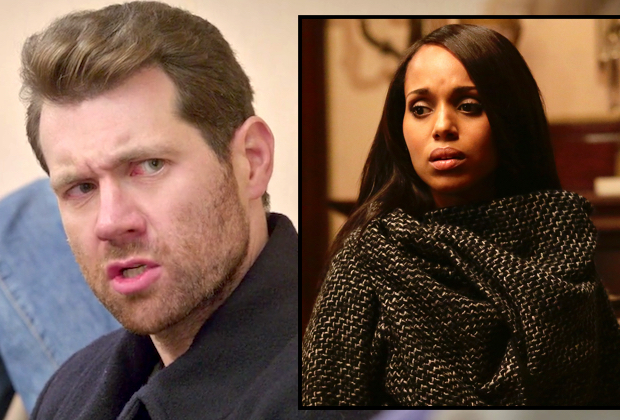 When Billy gets a job as the audience warm-up guy for Larry Wilmore’s Nightly Show follow-up, the last thing he expects is for that same boy to turn up as a guest. He now has a broken arm as well, he tells Wilmore, because homophobic peers beat him up. And if that isn’t enough to drive Wilmore mad, Billy’s in the stands poking fun at the failure of The Nightly Show. Within seconds, Wilmore runs into the audience and beats the living snot out of Billy. As you can imagine, the job doesn’t pan out.

Billy’s work life takes a backseat to his family life in “Code Change,” when he agrees to help brother Gary (recurring guest star Fred Armisen) lie to Rachel about being in the Israeli army. In reality, Gary’s holed up in the basement and living off crackers, too embarrassed to admit he was turned away almost as soon as he landed in Tel Aviv. In an effort to appease his brother’s wishes, Billy is forced to partake in what Rachel believes to be an actual exorcism involving various men from J-Swipe (aka Jewish Tinder), convinced that the sounds she’s hearing in the basement are coming from a demon.

Julie’s family is no less ridiculous. In “Passover Bump,” she deals with her coke-addled Aunt Bonnie (West Wing‘s Stockard Channing) while also dazed and confused herself, thanks in part to a Danny Aiello meditation app. In the third episode, she meets recovering alcoholic Vanessa (Rosie O’Donnell), who convinces her to rid herself of her addiction. Vanessa assumes Julie is hooked on alcohol, when in reality, she’s hooked on Marylin and tending to her every beck and call. Then, when Julie eventually decides to cut her eccentric mother out of her life, Marylin goes and has a heart attack. She pulls through, of course, and the mother and daughter realize that they need each other more than they’d care to admit.

Also in need of help is Arthur, who FaceTimes in during Passover and appears to be under siege at PBS Studios in Jupiter, Fla. (Seriously though, what was that?!) In a subsequent episode, he finds himself unable to bring Julie to orgasm. Not even his “second Becky from Roseanne” move seems to do the trick! (On a related note: I wonder if Sarah Chalke watches Difficult People.) The problem eventually alleviates itself once he stops letting stress consume him outside of the workplace. 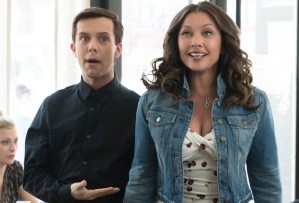 Equally dysfunctional is everything going on with Matthew. To start, we learn that both of his parents died in a funnel cake-triggered shootout at Dollywood. And after TV’s Maury Povich whips him out of his resulting “bad boy” phase, he is visited by his ex-wife Trish. Yes, Matthew was married to a woman — and she’s played by none other than Ugly Betty‘s Vanessa Williams. She returns to try and seduce Matthew as part of Pence’s gay conversion therapy program, and bless her heart, she manages to do it. Ultimately, though, she is unable to turn him straight for good, and thus doesn’t get her $6,000.

All of this is to say that Difficult People‘s multi-episode premiere does not disappoint, and to think that we’ve barely scratched the surface is mind-boggling. A few hundred words could easily be written about Julie’s part in Woody Allen’s followup to that best-be-forgotten Amazon TV show, or Nate’s midlife crisis prompting him to start a terrible light rock band with fellow restauranteurs. Or any of the many things said by Denise and Lola. At this point, however, we turn it over to you. Grade Difficult People‘s return via the following poll, then chime in with your thoughts below.