If at first you don’t succeed, try again — and that’s exactly what the Supernatural team is doing after its unsuccessful first spinoff attempt, which failed to earn a series order.

Unlike Season 9’s backdoor pilot “Bloodlines,” “which was by design meant not to feel like” the long-running CW drama from which it was spawned, the female-led potential offshoot Wayward Sisters “is meant to feel like Supernatural, but a different set of stories in that world,” co-showrunner Andrew Dabb said during a San Diego Comic-Con interview. 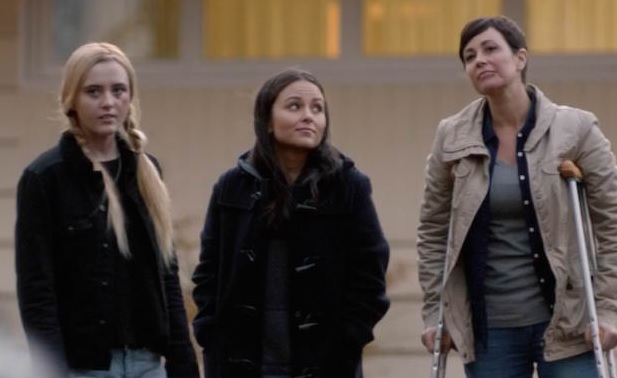 In the project — penned by Dabb and writer Robert Berens — Sheriff Jody Mills (played by Kim Rhodes) and a group of troubled young women, all of them orphaned by supernatural tragedy, team up as a supreme monster-fighting force. Teens Claire Novak (Kathryn Newton) and Alex Jones (Katherine Ramdeen) will be joined by psychic Missouri Moseley’s granddaughter Patience Turner (Clark Backo), who will be introduced in Season 13’s third episode, with another newcomer set to join the ensemble in Episode 9, Dabb revealed. The group, along with Sheriff Donna Hanscum (Briana Buckmaster), will then join forces in the backdoor pilot, airing as Episode 10, to “kick some ass and tell a story that [is] in the Supernatural sphere, but will feel and play as much different than” the mothership series, Dabb described.

Despite the differences, Wayward Sisters still “very much [has] the same sensibilities, the same driving forces [and] the same core themes, which are family,” Dabb added.

As for why now is the right time to try to once again expand the Supernatural universe, Dabb noted that this particular idea was “something we have been talking about, internally, really since we introduced Claire Novak to the show [in Season 10].” And with Alex living under Jody’s roof, the producers thought, “‘Oh, this might be a real opportunity to make this happen.'”

“That was something that simmered for us, and fans really latched onto it in a way we could have never expected, in a really awesome way,” Dabb continued. But the creatives had to wait for the show’s storylines to align. “Last season, because of the British Men of Letters and Mom, it didn’t feel right. This season, it feels right. And the way it’s going, as you’ll see as you watch the show, it evolves very organically out of the first half of the season… because we have such a high amount of lead time.”

Supernatural Season 13 premieres on Thursday, Oct. 12 at 8/7c on The CW, where it will now lead into Season 6 of Arrow.

Supernatural fans, are you looking forward to (re)meeting the Wayward Sisters?