When Power‘s Julio arrived for what he thought was a meeting with Tommy in Sunday’s episode, his head likely was full of strategy for dealing with the latest distro drama. But when actor J.R. Ramirez read the scene for the first time, his mind went in a far more suspicious direction. “I was like, ‘Really?!'” he says, laughing. “You walk into a warehouse by yourself? C’mon, Julio!”

As those who watched this week’s hour know, that mistake would be Julio’s last: The meeting was actually a Dre-orchestrated set up that delivered the ex-Toros Locos member straight into the revenge-seeking hands of his former gang mates. Though Julio fought like a beast, taking out two of his three assailants, he ultimately wound up on the floor. That’s where the remaining Toros Locos member — who was pretty banged-up, himself — sliced off Julio’s 718 tattoo and then shoved a blade into his chest, killing him and making good on the gang’s blood-in, blood-out code.

In a chat with TVLine Monday morning, Martinez broke down his character’s final episode and teased his next gig, which he couldn’t speak about in detail at the time but which we now know is Marvel’s Jessica Jones. Read on for all the details.

SKIN IN THE GAME | If it looked like Ramirez was in pain as Julio was fighting for his life, well, he was. “I broke my hand five hours into [the shooting of the death scene] without knowing,” the actor says. The injury took place in the sequence where Julio gets his Achilles’ sliced; the prop lead pipe he’s holding “got stuck on my pinky,” he recalls, and when he hit the ground, “my chest broke the fall. I heard a ‘pop!’ right away, but I thought I was fine… until 30 minutes later.” The break later required surgery. 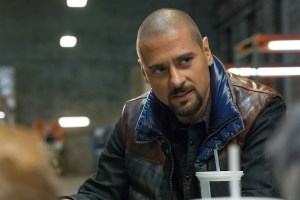 MORAL SUPPORT | Co-star Joseph Sikora wasn’t shooting on the day that Ramirez filmed Julio’s death scene, but he came to set anyway to support his friend. When he saw Ramirez’s swollen hand, “He was like, ‘You know you’ve got stunt doubles, right?'” the actor says. “I was like, ‘It’s my last day, man!'”

DRE = DANGER | “He’s a total snake,” Ramirez says of Dre, the power-hungry up-and-comer who’s been gunning to get his character out of the way for some time now. “Julio was in way over his head this year… All he wants is to move up and do right by Tommy and Ghost and the organization, be respected, have a seat at the table,” he adds. “He gave [Dre] the benefit of the doubt, and in the game, you can’t really do that.”

CRAWL TO THE FINISH | On that bloody, gasping crawl Julio does as the life is ebbing from his body: “They really wanted it to feel like he was not going to give up. He was going to fight until that last breath,” Ramirez says. “I tried to give it everything I had in my body.”

MISS JONES, IF YOU’RE NASTY | “I’ve been holding secrets since March,” the actor says of his new gig on Jessica Jones. Per EW.com, he’ll play Oscar, a single father who’s the new superintendent in Jessica’s building.

Got thoughts on Julio’s death? Hit the comments!