The drama also released its official Season 3 poster, which encapsulates the major problem faced at the start of the season: Caitriona Balfe’s Claire is in 20th-century America, while Sam Heughan’s Jamie is in 18th-century Scotland. And neither is too happy about being there without the other.

Season 3 will begin with Claire’s difficulties upon returning through the stones to 1948, as her marriage to Frank deteriorates under the strain of her reappearance and her carrying Jamie’s child. Meanwhile, in the past, Jamie tries to rebuild his life after the devastating Battle of Culloden and Claire’s departure.

Earlier in July, the time-travel drama announced plans to return to San Diego Comic-Con after a year’s absence.

Take a verra good look at the poster below — click on the image to enlarge — and then hit the comments with any- and everything you want to say about Outlander‘s upcoming season. 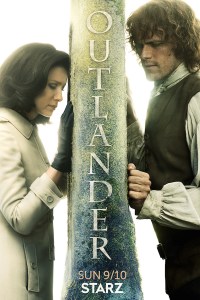