The Agents of S.H.I.E.L.D. are sitting out San Diego Comic-Con for the first time in five years.

The Marvel-based ABC series, heading into its fifth season, will not present a panel at this year’s pop-culture extravaganza (taking place July 20-23), executive producer Maurissa Tancharoen revealed on Twitter.

Truly sorry we won't be at #SDCC but we hope to see you at #NYCC.Just know we're working hard to bring you an awesome S5 of #AgentsofSHIELD.

According to Tancharoen, the show — which doesn’t return until midseason, at some point after Marvel’s Inhumans wraps its eight-episode freshman run (airing Fridays at 9/8c) — will be at New York Comic-Con this October. 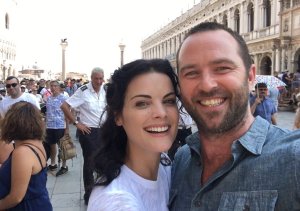 sources tell TVLine that NBC’s Blindspot — which is currently filming its Season 3 premiere in Venice, Italy (photo at right tweeted by @JaimieAlexander) — will skip San Diego Comic-Con for the first time since launching in 2015. Blindspot, however, will be at New York Comic-Con this fall.

Agents of S.H.I.E.L.D. star Clark Gregg also lamented the ABC series’ absence from SDCC in a series of humorous but genuine tweets:

…have become so sexy that SDPD and @marvel security could no longer guarantee their safety. Last year even a team of actual Inhumans…(2/4)

…failed to prevent one (lucky) fan from nibbling off part of Iain’s ear lobe. In all seriousness, we’re really sorry to anyone who’s… (3/4)

disappointed. We consider our loyal, badass fandom wholly responsible for S.5 and though the timing this year puts us at #NYCC17 (4 of IDK)

We WILL find a way to provide a special thanks to the bamfy #AgentsofSHIELD #DemAgents fam that got us here. Love… (5/eleventy)

Even without S.H.I.E.L.D., there will be no shortage of Marvel panels at the con this year: Marvel’s Inhumans (premiering this fall on ABC) and the FX drama Legion will stage panels on Thursday, while Fox newcomer The Gifted and Netflix’s team-up series The Defenders are scheduled for Friday.