How will The Flash‘s fiancee handle his absence? Who on Lucifer will literally dance with the Devil? Why did Blindspot “order Italian”? Is The Last Ship‘s loss The Strain‘s gain? Read on for answers to those questions plus teases from other shows.

Any scoop on how The Flash‘s Iris will be grieving Barry after sacrificing himself to the Speed Force? —Fowsia
With the action picking up six months later, it’s unclear if time heals all wounds. “We still don’t have Barry out of the Speed Force,” Candice Patton told us at Wednesday’s Saturn Awards (where she was named Best Supporting TV Actress). “Iris is really struggling to deal with that, and she does it in her own way.” And while there’s buzz that Iris will have assumed a larger role within Team Flash, Patton was mum on what if anything Barry’s fiancée might be doing to try to get her love back: “That’s a very interesting question that I can’t really answer!”

Any news on The Flash? —Megan
A role being cast for Season 4, that you have not heard about yet, should put the visual effects department to the test. 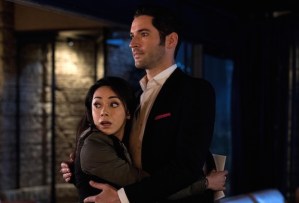 tell us about Lucifer would be greatly appreciated. –Adder
Aimee Garcia, who plays Ella, is bullish that despite how Season 2 drew to a close, we have not seen the last of Tricia Helfer on the Fox series. “I don’t know if we’ll see the Goddess back, but we’ll definitely see Tricia,” Garcia said at the Saturn Awards. “She’s such an icon and such a talented actor.” Bonus scoop: Ella herself “is going to be in touch with other characters” as Season 3 unfolds (starting Monday, Oct. 2), her portrayer shared. For example, “There might be a fun, little road trip that she takes with the Devil… that might involve some singing and dancing.”

Is there any info you can share for Once Upon a Time about who Henry’s wife will be? —Rebecca
Well, the casting call for [NAME REDACTED] describes Lucy’s momma as a “strong-willed, independent woman with a no-nonsense sensibility and a warm heart at her core.” Life hasn’t always been kind to [NAME REDACTED], but she is “sharp and resourceful” and never gives up on herself — or those she believes in. 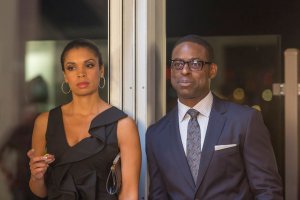 tease yet for the return of This Is Us? —Amanda
It appears that Randall’s wish to adopt a child to add to their brood will come true, in the form of a Newark-born tweenage female with trust issues.

What can you tell us about Blindspot‘s recent jaunt to Venice, Italy? —Erin
I can confirm that the purpose of the FOMO-inducing trip was to film some scenes for Season 3’s premiere episode (airing Friday, Oct. 27 at 8/7c).

Do you have any scoop on Orphan Black? — Gerardo
It sounds like Felix may be getting some action amid all the clone craziness. “There might be some love” for Sarah’s brother, Jordan Gavaris teases. “But I can’t guarantee it’s, like, monogamous. He might have found someone to chill and watch Netflix with.”

Any news on Riverdale Season 2? —Michele
Marisol Nichols told me that the oft-mentioned Hiram Lodge “is going to shake a lot of things up” when he surfaces in Season 2. “He’s a very powerful and dangerous character, so when he comes to Riverdale, he’s not exactly going to blend in!” As for the casting of the key role, Nichols said that Pitch‘s Mark Consuelos “is exactly what I pictured Hiram to be in my mind!” 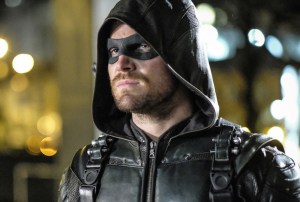 Or any news on Arrow Season 6 in general? —Sarah
I choose Column B, so that I can tease that the next, yet-to-be-cast Big Bad has been on many a fan’s wish list.

Where I can get tickets to America’s Got Talent‘s live finale? —Yitzchok
That is handled through On Camera Audiences.

Did Zack get turned in The Strain‘s finale? —Scott
When the fourth and final season arrives on Sunday, July 16 you will see that Zack is no stranger to “the white,” though he hasn’t been fully turned just yet. Which is not to say that a major player doesn’t have big plans for the (still, and very, bratty) lad.

Will Rhona Mitra return for Season 4 of The Last Ship? —Nick
That would be a neat trick, seeing as Mitra has been busy filming a role on another Sunday-night cable drama about a viral outbreak. In The Strain‘s final season, Mitra recurs as Charlotte Watkins, a quick-witted rancher’s daughter who is as good with a rifle as she is with her words. She will prove to be both a useful resource to the splintered team and a pleasant distraction for Fet, as the two engage in a passionate romance while out on the road.

Do you have any information on if/when Christina Ochoa’s Renn will be back on Animal Kingdom? —Liv
Though Ochoa had been busy with The CW’s Valor pilot and her starring role on Syfy’s Blood Drive, she somehow found the time to return to TNT’s Animal Kingdom, next appearing in the Aug. 8 episode, titled “Treasure.”

Are Emily Tyra and Noah Gray-Cabey coming back for Season 3 of Code Black? And Emily Alyn Lind? —Luis
Yes, yes and… yes. Drs. Kean and Dixon will be back, as will orphaned li’l Ariel.