Prepare to meet a much raunchier group of must-see TV friends.

The first trailer for Netflix’s Friends From College — releasing on Friday, July 14 — introduces a group of former classmates who are now facing down their forties  but still look to be stuck in their twenties. Leading the pack are marrieds (played by How I Met Your Mother‘s Cobie Smulders and Key & Peele‘s Keegan-Michael Key) whose relationship may very well be on the fritz. Their inner circle also includes Fred Savage (The Grinder), Nat Faxon (Ben & Kate), Annie Parisse (The Following) and Jae Suh Park (Adam Ruins Everything).

The trailer also features a bevy of recognizable faces, including Saturday Night Live‘s Kate McKinnon and The Mindy Project‘s Ike Barinholtz. Also heavily featured is Difficult People‘s Billy Eichner, who as Savage’s on-screen partner struggles to see what exactly his boyfriend likes about his college chums.

Will you making friends with Friends From College? Press PLAY on the NSFW trailer above, then check out the key art below. 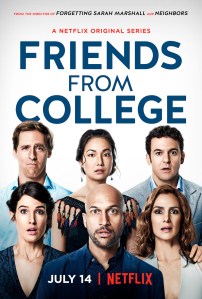