No, YOU’RE feeling guilty for dismissing American Gods‘ Mad Sweeney as a stereotypical drunk-‘n’-belligerent member of the fightin’ Irish.

In this week’s episode of the Starz fantasy drama, we find out a bit about the leprechaun’s back story, including why he’s drawn to Laura Moon. Much of the explanation comes wrapped in an extended Coming to America story about Essie MacGowan, whom book readers will recognize as the Essie Tregowan of Neil Gaiman’s novel.

Read on for the highlights of “A Prayer for Mad Sweeney.” 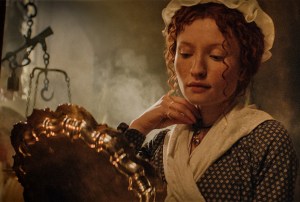 SING ME A SONG OF A LASS THAT IS GONE | When Mr. Ibis offers to help Mr. Jaquel clean up a corpse at the funeral home, Mr. Jaquel declines. “You have a story to tell,” he reasons. “I can see it in your fingers.” Indeed, Mr. Ibis heads to his office and pulls out his quill pen to write a Coming to America tale from 1721.

He explains that the colonies at that time were a place for religious freedom and such, yes, but they were also where criminals from England sometimes ended up if they were allowed foreign indentured servitude in place of death for their crimes. The passage was rough and the sentences were long, hard work, “but at least you were not waiting to hang in an English prison,” he says. And when your debt to society was paid, you were free to make your fortune in a new land.

He’s explaining all of this because it’s what happens to a young Irish woman named Essie MacGowan, who has believed in leprechauns and other supernatural faerie folk since she was a child. (And if she looks familiar, it’s because she’s played by Emily Browning, who also plays Laura. Because why not?) Essie has a penchant for leaving little offerings — dishes of cream, loaves of bread, etc. — out for leprechauns in the hopes of currying favor with the lucky little bastards. She also has eyes for the son of the house where she works as a (non-indentured) servant, and when he kisses her in the kitchen one evening, they soon become an on-the-downlow item.

He even gives her a necklace that has been in his family for years, promising to return from Oxford at Christmastime and marry her. But when his mother finds out that Essie’s wearing her son’s bauble, the son lies and says it was stolen, and pretty soon Essie’s standing before a judge, pleading for leniency.

And leniency she gets: She’s put on a ship for the Carolinas, but she sleeps with the captain and talks him into bringing her back to London. They seem like a happy couple, but moment he leaves for his next voyage, she steals all his silver and slips off. “The world braded Essie MacGowan a thief, so a thief she became,” Ibis says, noting that even though the impish redhead was breaking the law, she “lived by her own labors” and didn’t have to depend on a man to survive.

ESSIE’S UPS AND DOWNS | But when things are going well, that’s when people forget to pray, Ibis says, and pretty soon Essie gets caught stealing some lace. She’s thrown in Newgate Prison and winds up in a cell next to a fellow Irish prisoner who talks to her and keeps her company: It’s Mad Sweeney, in ye olden days garb.

He’s gone the next morning, but you know who’s there? The warden, who implies that Essie’s life could be much better if only she’d let him get acquainted with her nether regions. So she does, and when she gets pregnant, that provides the clemency previously denied her: She’s sent back to the colonies, where the new mother serves as a wet nurse for a recent widower, a tobacco farmer with an infant of his own.

He falls for her, she parlays that affection into a commutation of her indentured servitude — so they can marry, of course! — and they live happily for another 10 years before he dies. She lives a lot longer, telling her children and grandchildren about the supernatural denizens of her homeland, until she dies one night on the porch right after a kind and understanding Mad Sweeney shows up to say that she, and others like her, were the reason he’s in America in the first place. 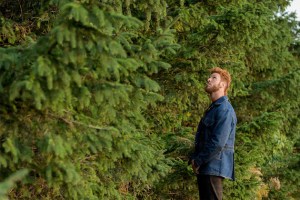 SEE YA, SALIM! | In the present, a less warm-and-fuzzy Mad is irked that the cab has pulled over so Salim can pray. He’s more irked that Laura thinks they should release Salim so he can go find the jinn. But after the leprechaun accidentally drops the name House on the Rock, Laura runs to tell Salim that he should head toward the Wisconsin tourist attraction in order to find his love. “You are an unpleasant creature!” Salim yells at Mad as he drives off, and in Salim-speak, that’s basically the equivalent of dropping an f-bomb.

The number of flies surrounding Laura is increasing, so she boosts an ice cream truck and cranks the air conditioning, all the better to preserve her rapidly deteriorating state. While they drive toward Shadow shimmering in the distance, Mad gets chatty. “I was a king once. I was. Then they made me a bird. Then Mother Church came along and turned us all into saints, trolls and fairies. General Mills did the rest.” (ha) He also says that he once foresaw his own death in a war long ago, so he didn’t fight in that one, which means he “owes a battle” and that’s why he’s beholden to Wednesday and his fight.

Then, a bunny hops out into the road, and all hell breaks loose.

AMENDS | Laura, who’s driving, swerves to miss the animal but winds up flipping the vehicle in the process. She goes through the windshield, her Y-incision ripping open in gruesome detail, and Mad’s coin rolling out onto the blacktop: She’s dead again.

When Mad comes to, he climbs out of the crushed truck, sees Laura, and flashes back… to the time that he caused the accident that killed her. What?! Yup, Mad was there as Laura drew her last breaths, after which he looked to a raven — Wednesday’s raven, I’d assume — and said something along the lines of “Tell him it’s done.” INTERESTING.

In the present, Mad curses a lot in Gaelic (?), stuffs Laura’s organs — and the coin — back in her body. She immediately wakes up, punches him in the face, then singlehandedly flips their truck back onto its wheels and climbs in. “Move it!” she yells. He does, and they drive off.