There are all kinds of TV shows out there these days… but there’s nothing quite like Dean Norris’ new TNT series Claws.

“It’s odd that, in a world of 450 shows, you can find something that actually kind of feels different,” the actor tells TVLine — and “different” is the right word for it. A colorful blend of drug-trade drama and girl-power comedy set in the swampy Florida suburbs, Claws (premiering this Sunday at 9/8c) stars Niecy Nash as an ambitious nail-salon owner who stumbles into a side job laundering money for the Dixie Mafia, thanks to her gangster boyfriend.

Norris — best known for playing relentless DEA agent Hank Schrader on Breaking Bad — has a blast here as Uncle Daddy (yes, that’s his name): a staunchly Catholic, proudly bisexual crime boss with a soft spot for his kids… and zero tolerance for anyone who crosses him. TVLine chatted with Norris about his “wonderfully weird” new role, how Uncle Daddy’s eccentric crime clan is like the Addams Family, his unexpectedly sweet singing voice… and whether he’ll ever reprise the role of Hank on AMC’s Breaking Bad prequel Better Call Saul. 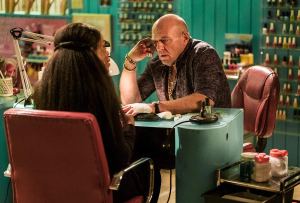 TVLINE | You joined the show late in the process, after they had already shot a pilot. What did you see in that pilot that made you want to sign on?
Well, they actually offered me the role before the pilot, but I was kind of in the midst of doing some other stuff, so I passed on it. It was really early on, and Niecy Nash wasn’t attached to it yet, so that was a big draw. She’s really one of my favorites. I don’t know about the term “underrated” or not, because she’s not for me, but I’ve always been a big fan. I was like, “Oh man, she’s in it? Great!” And then seeing what they did in the pilot, the sort of surreal Florida noir… it came out more when I saw the pilot. Then I had a meeting with the producers, and they kind of described the way it was going, and I was like, “Alright, I’m in now.”

TVLINE | Uncle Daddy is described as both deeply Catholic and actively bisexual. How does he reconcile those two things, exactly?
Well, how does the Mafia reconcile that they’re Catholic and they kill people, you know? If you’re deeply Catholic, on some level, you’re able to hold opposing views in your moral heart, and function. He’s hardcore. He believes in God speaking to him and helping things… and he’s also fully committed to both his wife and his boy toy. He’s emotional, and he’s also extremely, pathologically violent. He loves his wife, as much as he is attracted to younger men. He’s Catholic, at the same time that he can be a liar and a scumbag. And each time he’s in the situation that he’s in, he’s fully committed to it.

There are some really fun scenes where he’s sad about [someone dying], and in the next scene, he’s killing someone himself. There’s a scene where he’s chopping up a body and feeding him to an alligator, and eating chicken nuggets while he’s doing it. [Laughs] He gets splattered with some blood, and he’s like, “S–t, I’m eating here, man! What the f–k?” So it’s a great character, because he’s fully committed to each aspect of what he is, whether it’s the Catholicism or the bisexuality or the violence or the sadness. That’s what makes him fun to play. 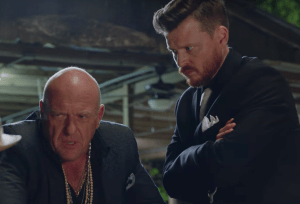 TVLINE | And the whole show is like that, right? It’s a comedy, but it’s also a crime drama, and it blends those together sometimes in the same scene.
Yeah, that’s another thing that’s really fun about it. Shows are always trying to find their voice, and I know I struggled with it when I first got there, when we were reshooting the scenes from the pilot. [Director] Howie Deutch had come on, who I really love to work with, and he and I really started to find it in the second episode, when, after Uncle Daddy punches this car because he’s so angry, he goes to Desna and he’s crying, and then he switches on a dime and starts zeroing in on needing to find out who killed [someone]. We both kind of said, “Oh yeah…” It’s funny, in a weird, weird way.

For me, you find the whole show in the second episode. There’s a funeral scene, and you’ve got strippers on stripper poles, and “Ave Maria” playing. You’ve got a preacher who quotes from Arnold Schwarzenegger’s biography. You’ve got Uncle Daddy crying, you’ve got people doing coke and partying… and it ends with a spiritual song that he sings. I’m like, “Yes! Here we go!” [Laughs] It’s like all these weird elements combined into one scene. It’s my favorite scene of the first three. You’re like, “What the f–k is going on?” But at no time are we making fun of it or commenting on it. Nobody’s winking at the audience. It’s like the Addams Family, where we just accept who they are. When we got to that funeral, I was like, “Oh yeah… we’ve found the tone of what our show is.” And I think we’ve tried to keep that throughout the rest of the series.

TVLINE | Yeah, at that funeral, you actually sing, and break out this beautiful singing voice. I never knew!
It’s funny, because they gave me a couple options. There’s like an Elvis version of that, which they wanted at first: a real over-the-top kind of thing. You could imagine Uncle Daddy wanting to be a kind of Elvis figure singing, but I thought, you know, after all the craziness of the funeral, he really just has this moment of pure, sweet sadness that he wants to sing to God. And I thought it was such a great contrast with all the crazy s–t that was going on at that funeral. He just found the choirboy in him, from when he was 13 years old or something, and that’s what came out.

TVLINE | I have to ask you about another show that’s airing right now: Better Call Saul. Are you still in touch with Vince Gilligan, and is there any chance you could pop up there for a cameo?
You know, I talk to him as a friend. We see each other a couple times a year on a friendly basis, and every once in a while, we’ll run into each other at various industry events. I certainly don’t bring it up… and if there were any discussions, I wouldn’t be able to tell you. [Laughs] It’s always the question on people’s minds, though. I get it.

Press PLAY below for a sneak peek at Claws, then hit the comments: Will you make an appointment for Sunday’s premiere?