Question: Inquiring minds are desperate to know: Was Showtime’s Twin Peaks revival the subject of your recent blind item?! —Carol
Ausiello: Sure as hell wasn’t. Speaking of TP, I’ve seen Episodes 3 and 4 and I have an announcement to make: My (minority) opinion remains unchanged, although I have to give props to Kyle MacLachlan for fearlessly committing to the wackadoodle material. 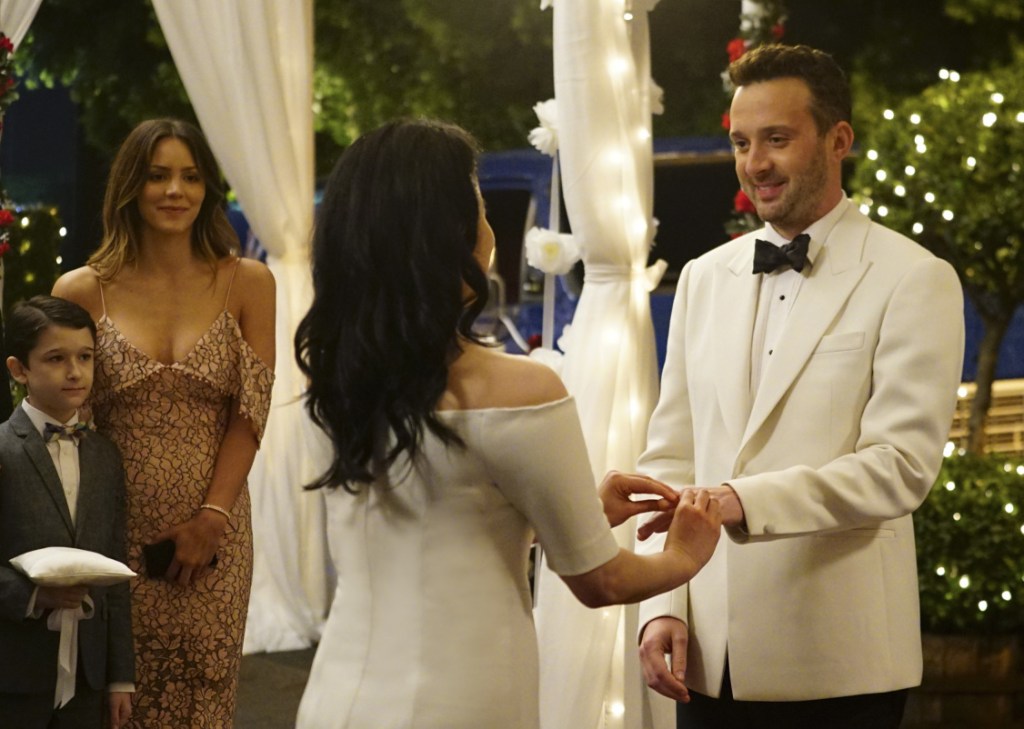 Question: Anything you can tease about Scorpion? —Stephanie
Ausiello: Now that Happy and Toby have tied the knot, executive producer Nick Santora is confident that another major development is in sight for the couple — like, say, a pint-sized addition to Team Scorpion. “Like all things, the answers can be found in elementary school: First comes love, then comes marriage, then comes something in a baby carriage,” Santora hints. Though he says he’s in no rush to bring a baby genius onto the show, Santora believes a pregnancy is “the natural progression” for Happy and her new husband. “One of my favorite speeches of the season was when Happy said she always wanted to wait outside the school for her kid,” he tells us. “She still wants that, and Toby wants that.”

Question: Long time fan, first time caller. Any news on how Will & Grace will retcon its finale? Or are they pulling a Roseanne and just ignoring it all? —Eliott
Ausiello: They’re (mostly) pulling a Roseanne. The finale posited that Will and Grace remained estranged well into their 50s. That will clearly be scrubbed from the history books. Completely eliminating Will and Grace’s now-teenage children (with Leo and Vince, respectively) from the revival equation will likely prove more of a challenge. But that’s what boarding school is for, right?

Question: I’m still recovering from the deaths of the Supernatural finale. Yeah. I know. I should be used to it, right? What can you say about Misha Collins and Mark Sheppard? Are they in Season 13? Or have we seen the last of Cas and Crowley on the show? —Fernanda
Ausiello: Pretty sure Collins’ Cas is sticking around (in some form). Sheppard’s Crowley, however, is dunzo (for now, at least).

Question: Desperate Younger fan here! Anything you can tell me about Season 4? –Lucy
Ausiello: Actually, Lucy, we recently visited the Younger set, where star Sutton Foster revealed how things pick back up when the show returns on June 28: “Season 4 starts with [Liza and Kelsey] back on that couch, so I had to make sure that dress still fit. We start right back in that conversation between her and Kelsey, and Kelsey does not take it well, which I expected. But what did surprise me was how everything unfolds after that. I had no idea how her reaction would affect the show, how it would all play out.”

Question: I’m obsessed with Lucifer! What can you tease about the finale next week? —Maria
Ausiello: As hinted previously, “The Good, the Bad and the Crispy” “is where everything comes to a head,” says co-showrunner Joe Henderson. “Lucifer finally answers the question of, ‘What do you do with a problem called Mom?’ and it’s the biggest episode we’ve ever done. It’s also our most special effects[-heavy] episode ever. We made a very big episode and somehow we were able to pull it off, so it’s explosive, but most importantly, and very important to me, it wraps up the Season 2 storyline and then ends on a cliffhanger that sets up what Season 3 is going to be.” And as that happens, “You’re going to have people throwing stuff at the TV when it ends,” Henderson warns. “But throw soft stuff, stuff that’ll bounce.”

Question: I loved the Once Upon a Time season finale. Could they be doing Narnia next season? If not, I’m surprised by the name Lucy. But I could totally be reading too much into it. —David
Ausiello: Looks like you answered your own question at the end there, David. Matt Mitovich asked the Once creators if there is anything to be gleaned from the naming of Henry’s daughter, and they came back with a decisive “no.”

Question: I’m stressing out about The 100 finale tonight! Anything you can tell us? Especially about Bellamy and Clarke? Thank you! —Salimah
Ausiello: Ah, we have a “Bellarke” fan on our hands, eh? Well, you’ll be happy to know that the two characters share a very emotional conversation at the top of the episode — though you’re right to be worried by its foreboding undertones.

Question: The Legion ring was shown in the fortress in Kevin Smith’s Supergirl episode. When will see it used in action? —Jen
Ausiello: When we delivered your Q to Supergirl star Melissa Benoist, she answered, “The Legion Ring, I believe, is on its way — but I don’t know exactly when.” 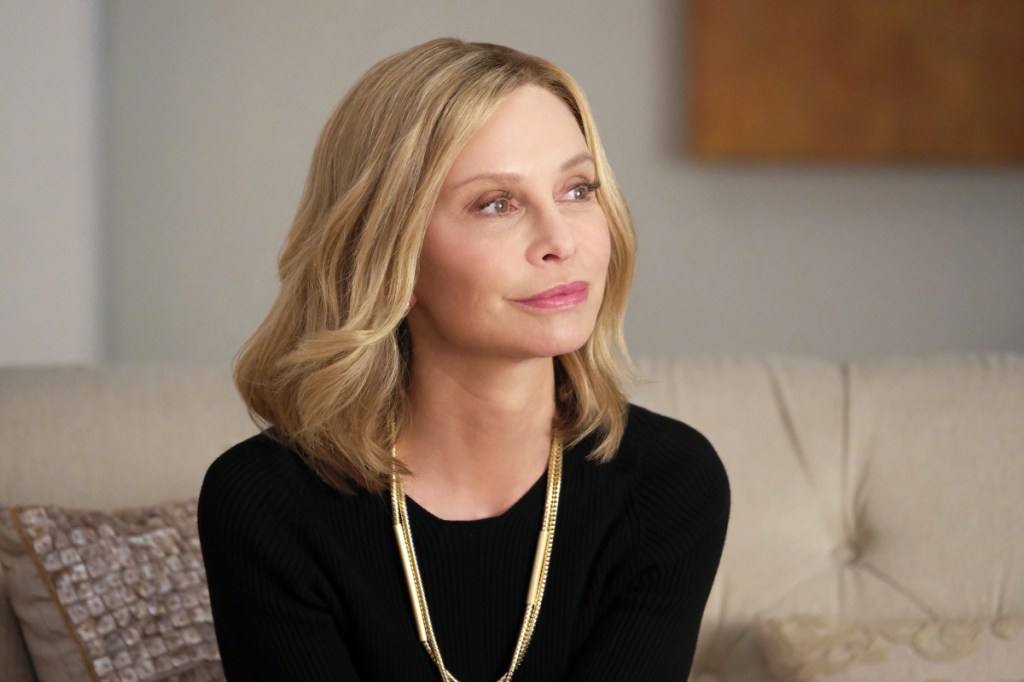 Question: Is it safe to assume that Cat Grant is back full time for Season 3 of Supergirl? She looked pretty cozy in her old office. —Kellen
Ausiello: It is not safe to assume that. Despite the fact that Flockhart was listed among the series regulars in Supergirl‘s official Season 3 press release, I’m told she will not rejoin the full-time ranks. But if the scheduling can be worked out, you can count on her putting in a handful of guest appearances, as she did in Season 2. BONUS SCOOP: Casting for Season 3 villain Reign is underway and rumor has it the Big Bad will have a major presence in Season 3 (i.e. appearing in possibly a dozen episodes).

Question: I want to know more about those OMG! moments coming up in Nashville. —Jess
Ausiello: We know of at least three: One involves Gunnar and Scarlett, one is about Juliette, and one has to do with Maddie.

Question: I’d love a Bloodline final-season scoop! —Jesse
Ausiello: The series finale “brings to a close the chapter of this story for the Rayburns,” teases exec producer Todd Kessler, who adds, “But it also leaves the audience with a question. And it’s a question that hopefully you will turn to the person you’re watching with and go, ‘What do you think happened?’ It’s meant to be satisfying and thought-provoking.” Having seen the finale, I can confirm that it succeeds on both fronts. I can also confirm that the Season 3 episode everyone will be talking about is not No. 10 (aka the finale). It’s No. 9 (the penultimate episode). I’m still processing everything that transpired in it. BTW, the final season drops this Friday on Netflix.

Question: Anything on Arrow? —Alexandra
Ausiello: Talia and Nyssa’s family reunion in tonight’s finale is “pretty al Ghul-ish from the second you see them on screen together,” actress Lexa Doig tells TVLine. And when the dust from the battle settles between the sisters, “There’s a clear winner, for sure. They choreographed a really wicked fight scene. And our stunts double just killed it in terms of selling it. I will say it’s pretty epic, but the whole episode is epic. It’s like one ‘holy s—t!’ moment after another.” 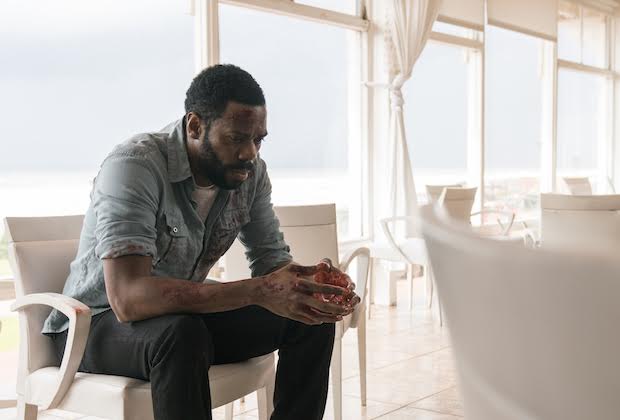 Question: Whatcha hearing about Fear the Walking Dead this season? — Brett
Ausiello: What, this wasn’t enough? OK, how’s this? In some ways, Season 3, which kicks off Sunday, June 4 (9/8c, AMC), marks a reset for the Walking Dead prequel. In the two-hour premiere alone, “there are some stories we are able to wrap up,” showrunner Dave Erickson says. Such as? “There’s a character we sort of put aside for a while last season who had a huge impact on Strand. She’s going to return, and Strand will have to come to terms with that.” Which may explain why the first Season 3 photo released of Colman Domingo showed his alter ego with blood on his hands and a shell-shocked expression on his face.

This AAnd That…
♦ Any other Unbreakable Kimmy Schmidt watchers encounter a precipitous dip in quality following Season 3’s sixth episode? I found Episodes 7, 8 and 9 to be something of an endurance test. Does it get back on track with Episode 10?
♦ New Girl fans can stop wondering/worrying how this bit of news will impact Nasim Pedrad’s involvement in the Fox’s comedy’s eight-episode final season, because I’ve got the scoop: It will have little to no effect. I’m told we will likely see Aly in at least six, maybe seven of the episodes.
♦ Is it already out there that Big Apple-based Difficult People shot a tiny portion of its upcoming third season (the finale, specifically) on location in Los Angeles? It is? OK, as you were.
♦ Did you see what the nice people at Bates Motel left on my doorstep on Tuesday? You did? OK, as you were.