This summer, Andy Samberg is trading in his police badge for a very tight pair of biking shorts.

The Brooklyn Nine-Nine star is headlining a new HBO mockumentary special, Tour de Pharmacy, set in the cutthroat world of competitive cycling. HBO just announced a premiere date for Pharmacy — Saturday, July 8 at 10/9c — and the new trailer, posted above, promises plenty of laughs… and even more stars.

The grainy video action takes place at the 1982 Tour de France, where just about every cyclist is doped up on performance-enhancing drugs. As a French-sounding Orlando Bloom complains, “How do you beat a man on drugs if you’re not on drugs?” (Which is basically an admission that he’s on drugs, too.) 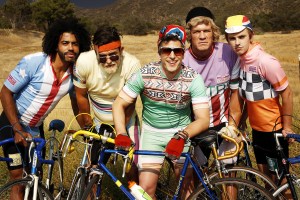 Pharmacy is written by Murray Miller (Girls) and directed by Jake Syzmanski (SNL) — the same team behind Samberg’s 2015 tennis mockumentary 7 Days in Hell.

Press PLAY on the trailer above for a sneak peek at Tour de Pharmacy, then hit the comments with your first impressions.