Ghost Rider is back to heat things up on Agents of S.H.I.E.L.D., but dare we say, we’re going to miss that far-out Framework world?

Constructed by Radcliffe’s android assistant Aida as a hellacious bit of heaven (at least as far as Coulson & Co. were concerned), the third “pod” of Season 4 creatively re-energized the ABC drama and stabilized its ratings — perhaps enough, one could argue, to score it a Season 5 renewal last week.

With the Season 4 finale arriving Tuesday at 10/9c, TVLine spoke with co-showrunner Jed Whedon and executive producer Jeffrey Bell about why the Framework’s “What if?” premise popped, as well as tease the “something quite different” on tap for Season 5.

TVLINE | Was there any point in breaking 4C that it hit you that this arc might be some next-level kind of greatness?
BELL | No….. [Laughs]
WHEDON | [Laughs] I wish that moment ever happened.
BELL | No, we’re writers, so… we hate and are afraid of everything. And then we do out best to not make it terrible, and sometimes people like it — like this year!

TVLINE | It’s been so much fun.
BELL |  It is fun.
WHEDON |  I will say that going in we knew that it would be rewarding for longtime viewers to be able to flip things on their head. We knew we were going to have fun with it, because we’re in our fourth season, we’ve done a lot of stories and we knew we’d get to play in a new world. So, we knew it would at least be fun, and usually that leads to stuff that the audience loves. We did have a sense that we were going to enjoy it, and we’re glad the viewers did as well. 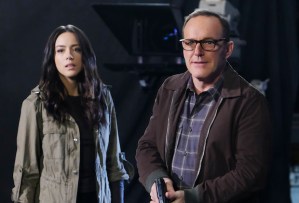 think “What if?” storylines are just inherently entertaining, or is there something “extra” going on here?
BELL |  What you choose for the “What if?” is really what it’s all about. “What if?” can be crazy or whatever, but I will give the writers room credit that everything that was chosen had an emotional resonance. It was something you hadn’t seen, or wanted to see or wondered about, so for us it was really rich territory to mine.
WHEDON |  And there’s the fact that it was rooted in our own characters’ choices, not to mention characters the audience has spent many years with now. It wasn’t just, “OK, let’s go Wacky World!” It was, “What if you’d made different decisions?” That made it for us a much more fun puzzle. And as Jeff said, it gave it resonance.

TVLINE | Do you get on set often? Did you get any feedback from the actors on being re-energized by it all?
BELL |  One of the nice things about shooting in Los Angeles is our offices are right down the studio from the stages, so it was fun to see. They were excited for each script, to see what’s going to happen next.
WHEDON |  It’s funny seeing the different reactions. For Clark [Gregg], it was just so fun to get to play a fish out of water, a bit of a bumbling history teacher. And Iain [ De Caestecker], he was very uncomfortable at first trying to play someone with such a stillness and taking such a  dark turn, but he definitely started to enjoy it the more he got into it — which was scary in its own way!
BELL |  One of the fun things was we got a photo one day — “Iain would like to wear his hair like this” — and we were like, “Oh God, that alone is a huge change!”
WHEDON |  It turns out he’s a Nazi. Who knew!
BELL |  For the actors to find little physical things like that…. For Clark to be wearing glasses, and at the end when he comes out as an agent of S.H.I.E.L.D. he takes them off, that for him was a key to the character.

TVLINE | As you broke 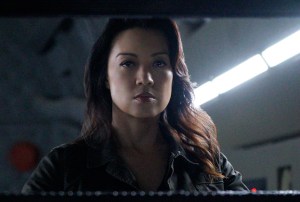 last week’s episode, had you almost forgotten how much May had missed out on?
WHEDON |  Yeah, there was a lot of talk in the writers room about, “Wait, she hasn’t been here for a long time! The last thing she saw was Robbie Reyes.” So we knew that once she came out [of the Framework], she had a whole arc that she was not a party to. We knew there would be some fun to it.
BELL |  I also want to point out that we had not had all of our characters together all season. The whole team has not been together. There have been different variations of them and groups of them and fake versions of them, but that was a challenge for us as well, in terms of that playing in a good way, not in a bad way.

TVLINE | Looking ahead to the finale: What will Ghost Rider’s return bring to the mix? What kind of mood is he in?
BELL |  He’s never in a good mood. That’s why he’s Ghost Rider!

TVLINE | Does he have a specific objective?
BELL |  Based on the stories you’ve seen, you could answer that question. But yes, he does.

TVLINE | And Yo-Yo, she has just arrived in the same Framework as everyone else?
BELL |  She woke up where everybody had been, but things have gone horribly, horribly wrong there. 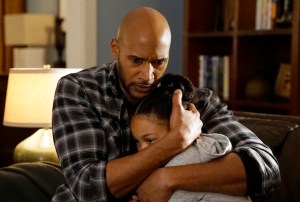 TVLINE | There’s a photo of Mack hugging Hope, and it looks pretty heartbreaking. Does he have a difficult decision ahead?
BELL |  I would say yes.

TVLINE | And as far as Season 5, is it about introducing a  new character a la Ghost Rider, or is there a different kind of wrinkle planned?
BELL | Each year we’ve tried to reinvent the series in some way, in concept. And we will try to do that again. Without talking about characters, I think the end [of Tuesday’s finale] really does suggest something quite different….
WHEDON |  …and we’ll see what that means. But yes, there’ll be a little bit of a tease.