Teen love triangles are fun and all… but this Thursday’s Riverdale (The CW, 9/8c) is going full-on crime drama.

“Most of our episodes, there’s a balance between the soap and the mystery,” showrunner Roberto Aguirre-Sacasa says, but this week’s episode “is all about the mystery.” And rightfully so, since Jughead’s dad F.P. was just arrested — and possibly framed? — last week for the murder of Jason Blossom.

The arrest hit Jughead hard, crushing any hope he had of getting his family back together. Star Cole Sprouse (Jughead) says this week’s scenes of Jughead visiting his dad in jail are “definitely my favorite of Season 1.” But has F.P.’s arrest convinced Jughead that his dad actually is a killer? Sprouse will only shrug. 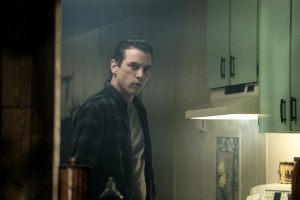 Skeet Ulrich, who plays F.P., admits that Thursday’s jailhouse scenes get “pretty emotional. There’s a lot of disappointment, and a lot of secrets still being hidden. It’s quite intense.” But he doesn’t think F.P. is totally evil: “I always talk to Roberto about [F.P.’s] throughline being, ‘Sometimes good people do bad things for the right reasons.'”

Archie’s dad Fred (Luke Perry) takes a step back from his friendship with F.P. after the arrest, Perry teases: “You know the old saying: You don’t know who your friends are until the s–t gets deep? I think when it gets deep with [F.P.], it makes [Fred] stop and think about what this friendship is, the history behind it. And is this somebody [Fred] can be friends with going down the road? Because [he’s] got to set an example for [Archie].”

But Archie knows something his dad doesn’t: Someone planted a gun in F.P.’s trailer to make it look like he killed Jason. “The kids are trying to prove that F.P. was framed, but no one believes them,” Aguirre-Sacasa hints. “And it seems like the entire town is going into lockdown to railroad F.P. It’s a little bit of a race against time.”

And the clock is definitely ticking: Aguirre-Sacasa has already said the season-long mystery of who killed Jason will be solved this week, ahead of next Thursday’s season finale. Will Jughead have to schedule more visits to the Riverdale jail? Or is another main character about to get fitted for an orange jumpsuit?

Alright, Riverdale fans, time for the big question: Who. Killed. Jason. Blossom? Give us your best theories in the comments.