Chuck Lorre is reigniting his war with President Trump, and this time his weapon of choice is… Charlie Sheen?

The Big Bang Theory co-creator took aim at Trump at the conclusion of Thursday’s episode, using his closing-credits vanity card to remind our current commander-in-chief of the time he was vanquished by Two and a Half Men.

Displaying a 2006 ratings grid that showed Trump’s Apprentice getting clobbered by an episode of Lorre’s Men, the prolific producer opined, “Defeat terrorism and crazy dictators? He couldn’t even defeat Two and a Half Men.” (See below) 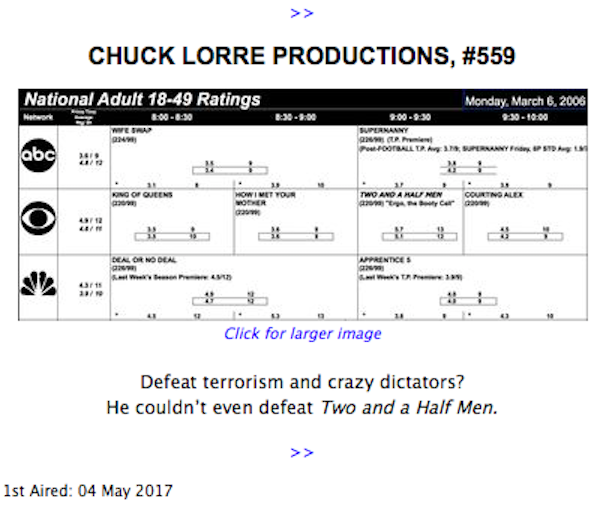 This is not the first time Lorre used his vanity card to go after Trump. Back in January, he called on Wikileaks founder Julian Assange to hack the then-President Elect. “Belated congrats on your whole Mr. Robot thing,” Lorre began. “You promised to use the Internet to expose and bring down all the corrupt bastards ruining our world, and boy did you almost follow through. Julie baby! Boychick! The job’s only half-way done!”