Marvel’s Agents of S.H.I.E.L.D. has some hot stuff on tap to close out its Framework/”Agents of Hydra” storyline. 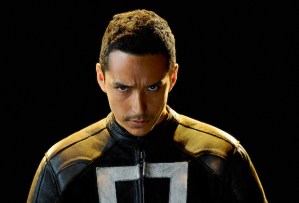 TVLine has learned exclusively that in the ABC series’ Season 4 finale, airing Tuesday, May 16 and titled “World’s End,” Gabriel Luna will reprise his role as Robbie Reyes aka Ghost Rider.

In that closing hour, Coulson and the team — amid the surprising emergence of Ghost Rider — attempt to stop Aida from, you know, ending the world.

Having made his S.H.I.E.L.D. debut in the Season 4 premiere, Luna last appeared in the Ghost Rider arc’s early-December finale, when Robbie sacrificed himself in a quantum explosion, taking his evil uncle with him.

Other guest stars lined up for the Season 4 finale include Natalia Cordova-Buckley and Adrian Pasdar (returning as Elena/“Yo-Yo” and General Talbot), plus Joel Stoffer (Charmed) as “silhouetted man.”