Question: I’m already having Walking Dead withdrawal. Got anything on Season 8 yet? — Bud
Ausiello: As a matter of fact, yes. Remember in the finale, when Sasha said she wasn’t giving up on Eugene, even though he’d reverted to his most spineless self? That was “a hint to what the story is,” showrunner Scott Gimple recently told TVLine. “It certainly looked like he was still a Savior. But is that going to haunt him… change him? Or is he forever Negan?” (My guess: Eugene hasn’t bitten his last dick.)

Question: Since we saw Laurie again after she died on The Walking Dead and now Abraham after he died, what do you think are the odds we’ll get to see Glenn again? — Kelly
Ausiello: Pretty good, actually. As Maggie gets closer to giving birth, it’s “certainly possible,” says EP Gimple, that Steven Yeun might reprise his role for some newly created flashbacks or a vision or something. “I’d be silly to say it isn’t.” But, if a Glenn sighting were to be tied to his baby’s arrival, you could have quite a wait ahead of you. “She might not be that close,” Gimple hastened to add. “Things have been moving pretty quickly, but not a lot of time has passed.” 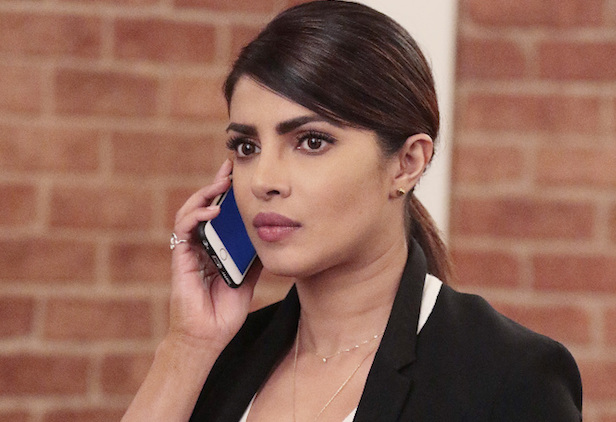 Question: Tell me something about the rest of the season of Quantico. —Tawna
Ausiello: How about a little finale scoop? We hear that the ABC spy drama will “borrow” for the episode an actor who’s currently on another series, and that actor will show up in the last 30 seconds of the finale “in a major way.”

Question: Will we see anymore Arrow flashbacks into Felicity’s past? —Jennifer
Ausiello: I cannot guarantee that Felicity plays into them, but EP Marc Guggenheim said that since all of Stephen Amell’s scenes in the Olicity-centric Episode 20 are with Emily Bett Rickards, the Russia flashbacks will get a week off. Instead, “The flashbacks are to a different time period, as we occasionally do,” he shared. “They take place between Seasons 4 and 5.”

Question: Grey’s Anatomy‘s Maggie is gonna find out about Meredith and Nathan someday, right? Still waiting. — Leah
Ausiello: Yes. As previously reported, this season, even. And when Maggie learns the truth, between that and her mom’s death, “it does change her outlook,” says Kelly McCreary, who plays Dr. Pierce. “It’ll give her a different perspective on the value of having a partner. She’s got her sister now, and she’s looking for another kind of partnership.” We may even have a hunch about with whom she’ll be forming that partnership.

Question: Only three episodes of Bates Motel left! Scoop, please? —Steven
Ausiello: Norman, with a strong assist from “Norma,” will throw someone close to him under the bus in an effort to clear his name. Also, something happens in the first 30 minutes of Monday’s episode that suggests Vera Farmiga will be getting a lot more screen time in these final episodes.

Question: iZombie is finally back and I feel like you’ve been pretty mum on the teaser front. Any scoop our favorite un-dead doctor and her merry band of misfits? —Jess
Ausiello: See if you can crack this Season 3 storyline mystery: “Ravi has his own investigation that takes him out of the group completely,” Rahul Kohli teases. That’s Clue No. 1. Here’s Clue No. 2:  The fact that Ravi isn’t a detective makes him the perfect choice for this mission. “He’s far enough away from everything that he’s anonymous,” Kohli teases. “So he’s able to be a little bit more incognito than the other characters.”

Question: Loving FEUD. Does it count as a spoiler if you tell me something that happens when the plot is already technically history? — Sam
Ausiello: I’m gonna say… kinda? In Sunday’s “Hagsploitation” (FX, 10/9c), Bob teaches Jack that payback is a bitch, only to then be held accountable himself — by a woman, no less. (And not either of the ones you’d expect.)

Question: Have you seen The Leftovers Season 3 premiere? Any intel on it and/or the final season in general? —Roger
Ausiello: Roger that, Roger. The closing scene of the April 16 opener made me spit my Diet Half ‘n Half Snapple all over my MacBook Air. It’s a massive mind frak that launches a new mystery — and one I’m told we will get an answer to by the series finale. Also, if you enjoyed last season’s alt-reality, standalone ep “International Assassin,” then you are going to fall head over heels for its quasi-sequel, Season 3, Episode 7’s “The Most Powerful Man in the World” — aka the series’ second-to-last episode ever. (Take note that I refrained from referring to it as the “penultimate” episode. I know an overexposed word when I see one.) Oh, here’s one more Leftovers tidbit: Amy Brenneman’s Laurie figures prominently in these final eight episodes. 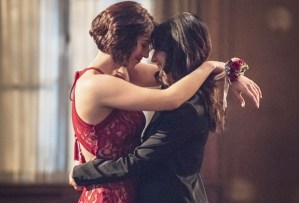 can share about the closing episodes of Supergirl Season 2? —Laura
Ausiello: When Matt Mitovich during his recent set visit asked Chyler Leigh if she had heard anything about the finale, she parted with this provocative morsel: “I don’t know a lot. But I know one thing that could be happening that might be kiiiind of a big deal for Maggie and Alex.” With a smile, she added: “It’s kind of, maybe, sort of a big deal.”

Question: Before this season of NCIS: Los Angeles ends, will we get an update from Hetty about Granger’s fate? —Michelle
Ausiello: Granger (who was played by the late Miguel Ferrer) will be mentioned during an episode that airs later this month.

Question: Will we see a Densi wedding this season on NCIS: LA? —Tim
Ausiello: You will get a proper proposal by the time the May 14 finale rolls around, Daniela Ruah tells us, “But we will not get a wedding [this season].”

Question: I’m so anxious for the return of Brooklyn Nine-Nine! Any information on what happens to Gina? —Lynne
Ausiello: B-99 co-creator Dan Goor recently teased to TVLine that fans should be legitimately concerned about Gina heading into the spring premiere (airing Tuesday, April 11). She did, after all, get hit by a city bus. And even if she does survive, she may not have a job to come back to since, we will learn, the precinct faces potential closure. With crime down, the NYPD is looking to shutter one of Brooklyn’s 20-plus precincts. And would you believe that the fate of the Nine-Nine may very well rest in the hands of Amy’s ex-boyfriend, Teddy (played by returning guest star Kyle Bornheimer)? Well, believe it, because he’s the one tasked with auditing the precinct.

Question: Zach Roerig from The Vampire Diaries has been posting pictures from the set of Behind Enemy Lines. Is he going to be on the show full-time? –Matthew
Ausiello: Good eye, Matthew. Unfortunately, I’m told that Roerig is only guest-starring in the Fox pilot at this point. Either way, I don’t think you have to worry about Roerig being gone from your TV for too long. Has he ever not been employed? (BTW, those pics you mentioned? They have mysteriously vanished from social media. Twist!) 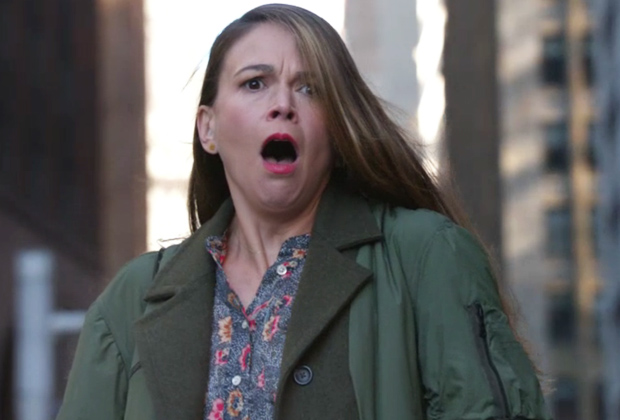 Question: Loved your little Younger script tease this week… but now I need more. What can you tell me? Anything? –Lee
Ausiello: Don’t worry, Lee, I’ve got your fix — though you might want to be sitting down for this one: Younger is introducing a third potential suitor for Liza in Season 4. It’s a 40-something gentleman named Tucker Stevens, and although he doesn’t initially present himself in a romantic light, we have a feeling she’ll come around. Oh, and did I mention he’s trying to court Liza to a rival publishing house?

Question: I’m going through Vampire Diaries withdrawal over here! What can you tell me about Alaric’s upcoming trip to The Originals? –Alice
Ausiello: Sorry to hear about your difficult time, Alice. Hopefully this can can help: Charles Michael Davis (aka The Originals’ Marcel) recently teased a scene he has opposite Matt Davis (Alaric) and Daniel Gillies (Elijah). “Matt took it upon himself to ad-lib a lot, so it was tough getting through that scene,” he said. “When they put out the bloopers for the season, I feel like that scene is definitely going to be in there.” (And here’s some bonus scoop for that blooper reel: It may or may not involve Beyoncé.)

Question: So I watched The Marvelous Mrs. Maisel and loved it. Amazing. So funny, so smart. When does Amazon make a decision about their pilots and when would they air? —Jill
Ausiello: Soon. Very, very, very, very, very soon.

This AAnd That…
♦ It looks like Lauren Graham has escaped the clusterfrak that will be Emmy’s limited series lead actress race. Sources confirm that as a result of a weird Academy rule that categorizes revivals as regular ongoing series, Gilmore Girls: A Year in the Life will actually compete as a drama series. That is, unless Netflix petitions Emmy brass to allow the four-episode continuation to enter as a comedy series race (which is probably where it belongs). But as of now, Graham — who is considered A Year in the Life‘s best shot at a nod — will be battling Viola Davis, Claire Danes, Keri Russell, Robin Wright, etc. for one of the six Lead Actress in a Drama series slots.
♦ Blind-ish item: At least two of these items pertain to Grey’s Anatomy. Speaking of Grey’s, no, this is not Matthew Morrison’s mystery man that Mer is shooting daggers at in coach (as some have speculated).
♦ Multiple sources are cautioning me to temper my excitement about a certain unnamed pilot I’ve had high hopes for. In fact, rumors are swirling that the project is essentially DOA – and production hasn’t even wrapped yet. Sigh…