Something tells me that I wasn’t the only one tuning in to Tuesday’s Knockout Rounds for The Voice with a certain amount of trepidation — and by “something,” I mean, of course, the comments that followed Monday’s recap. So many of the coaches’ decisions on Night 1 of the Knockouts defied logic that I — and you, too, it seemed — wanted to recommend that they all get their hearing checked. Alicia Keys dropping Lilli Passero in favor of Ashley Levin? Adam Levine keeping Josh West over Johnny Hayes? Quizz Swanigan getting stolen but not Felicia Temple? My head still hurts from the amount of time I spent scratching it! So I hoped that Tuesday’s episode would return us to some sense of… well, sense, frankly. Did the coaches clean out their ears and make the right calls? Let’s review…

Team Alicia: Anatalia Villaranda singing “Two Black Cadillacs” defeated Dawson Coyle singing “Demons” | If Anatalia was aware of Alicia’s love of soul country beforehand, choosing the Carrie Underwood hit was a brilliant strategical move on her part. However, it may not have been the best practical move — in rehearsals, it definitely didn’t sound like a home run. On the flip side, Dawson’s selection of the Imagine Dragons number seemed to suit him better — that wasn’t just up his alley, it was the street on which he lives. On stage, Anatalia’s phrasing bugged me from the start. As she neared the chorus, some of her natural power began to come through — the stuff that makes her, her, ya know? — but ultimately, it was just the wrong song for her big, big voice. She wound up seeming like she was trying too hard to do what ordinarily comes so naturally to her. When Dawson took his turn, eesh… OK, he sounded flat as a pancake at the beginning. He improved on the chorus and managed to nail a coupla nice long notes along the way, but yeah, this was not a star-making performance by any means. Gwen said he sounded like an alternative record, but to me, he sounded like an alternative to a record anyone would listen to. So, though this was hardly Anatalia’s finest hour, Alicia made the right call keeping her.

Team Blake: TSoul singing “These Arms of Mine” defeated Enid Ortiz singing “When We Were Young” | In rehearsals, Enid got a standing O from buddy TSoul; criticism from her coach. Personally, I’m not sure it was the smartest idea for her to do Adele again unless she was trying to form a cover band. But there was no denying that she does a mean impersonation. Her lower register was solid, and when she let loose, she sounded great. Thing is, would you remember her a week later? I wouldn’t (and didn’t until we were reminded of her particular sad story). When TSoul took to the stage, at first I was unsure. Was that in key? Off? Weird? Cool? But the longer he went on, the easier it became to just admire the fact that he was unique. And here’s the thing: His finest hour or not — and it wasn’t his finest hour — he was/is still someone that you wouldn’t easily forget. When you’re picking a singer to back all the way to the live shows, isn’t that what you want? Yeah. So, if you ask me (and no one did), Blake made the correct decision. 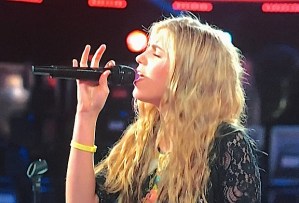 Team Gwen: Brennley Brown singing “Up to the Mountain” defeated Aaliyah Rose singing “Like I’m Gonna Lose You” (Aaliyah stolen by Blake) | Intimidated by Aaliyah’s passion in rehearsals, Brennley knew that she had to really bring it — especially as a newcomer to Team Gwen. Then again, maybe she wouldn’t have to try that hard. On stage, Aaliyah sounded fine but held back maybe more than was advisable when trying to make a lasting impression. When the spotlight was focused on Brennley, she sang with a depth and soulfulness that belied her years. And, unlike so many singers Tuesday, she sounded killer from Note 1. By the time she was done, she’d taken us all to church. To me, this was no contest — Brennley owned it; Aaliyah at best rented it. Not sure why Blake decided to steal. Shock value? A dislike of seeing teenage girls cry? At least Gwen made the right call.

So, what did you think of Tuesday’s Knockouts? Best and worst performances? Your current pick to win? (My money’s on Chris Blue — voice, presence, total package.) Hit the comments.