THE PERFORMANCE | All season long on HBO’s Big Little Lies, Kidman’s character Celeste has projected the perfect façade: perfect marriage, perfect kids, perfect life. But in this week’s “Once Bitten,” that façade finally developed a few tiny cracks in it — allowing Kidman to deliver an astonishingly vulnerable performance.

Celeste’s marriage to Perry is volatile, and often violent, and Kidman has brought a fascinating complexity to that, with Celeste defending her husband’s abusive outbursts, and even admitting to being turned on by them. This week, though, Kidman let us see the psychological toll that this takes on Celeste in little moments, like when she nearly jumped out of her skin when a barista touched her shoulder in the coffeeshop.

It all came to a head in a mesmerizing one-on-one scene between Celeste and her marriage therapist: At first, Celeste put on a defiantly cheerful front, insisting that she and Perry are both at fault for the anger in their relationship, and Kidman made Celeste’s denial painful to watch. But as the therapist pushed her (“He hurts you”), Kidman’s porcelain face trembled and then dissolved into tears as Celeste admitted she has feared for her life. Still, Celeste fought for her marriage, and Kidman made us feel Celeste’s aching internal conflict along with her. 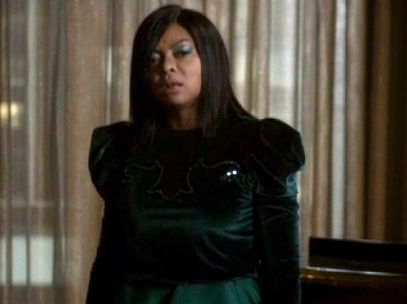 HONORABLE MENTION | The moment occurred just as Cookie was finished taking a baseball bat to Lucious’ beloved piano. The fury and rage that had turned her into a one woman wrecking ball started giving way to a deep and aching sadness as she began to grieve the irreparable damage that had been inflicted on her relationship to the man she, against her better judgement, still madly loves. And Taraji P. Henson navigated that emotional transition with all the subtlety and nuance of an actress at the top of her game. “Trying to erase me Lucious?” she whimpered to her ex, her voice cracking. “After all I’ve done for you. I did 17 years [in prison] for this family.” Cookie may be the queen of shade and caustic one-liners, but as Henson reminded us this week, beneath all the bravado and swagger lies a woman with a broken heart.

HONORABLE MENTION | Restrained from running and jumping and fwip!ing, Arrow‘s Stephen Amell this week seized the opportunity to make the most of Oliver’s shackled situation, by delivering one of his most fierce performances to date. As Oliver struggled to get a bead on Adrian Chase’s agenda, to decipher his captor’s call for a “secret” to be shared, Amell registered his alter ego’s frustration. Then, when Chase appeared to snap Evelyn’s neck as punishment for Oliver’s silence, Amell let loose with a bellow we can almost still hear. And while some have scoffed at the “obvious” confession that eventually came forth, Amell sold us on Oliver’s despair in uttering the damning words. Oliver may have looked strong, his musculature and scars laid bare throughout, but Amell made clear the hero had never felt so weak.

HONORABLE MENTION | Whereas Arrow‘s Amell effectively mined darkness, The Flash‘s Grant Gustin immersed himself in lightness and love as Barry and super friend Kara (a buoyant Melissa Benoist) sang and danced their way through a musical mirage erected by the Music Meister. Above and beyond Gustin’s performance as a singer, the Glee grad’s acting was peppered with tiny touches — Barry barely holding back his inner fanboy as “Joe” sang a duet with “Stein,” or cluing in Kara to his new time travel restrictions — that were the very best Easter eggs to find and collect. But yes, it was Gustin’s closing serenade to scene partner Candice Patton, the look of deep love pouring out of his peepers throughout, that brought us to our feet clapping, cheering for an encore.