Like an alarming number of Dr. Thackery’s patients, The Knick seems to have drawn its last breath.

Although there’s no official word from Cinemax, it appears unlikely the Clive Owen-starring medical drama will return for a third season, according to This Is Us star Chris Sullivan, who played The Knick‘s gruff ambulance driver Tom Cleary. 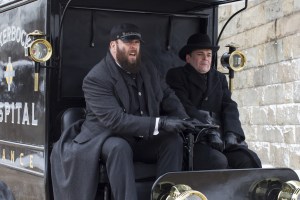 The Knick ended on a bit of a cliffhanger, with Owen’s drug-addled surgeon Dr. Thackery performing an operation on himself in the Season 2 finale and nearly dying on the operating table. And the show was a critical darling, earning a Peabody Award, a Golden Globe nomination for Owen and two Emmy nods for director Steven Soderbergh. But Sullivan doesn’t mind if The Knick‘s sudden demise leaves us wanting more.

“I kind of love that British style: two seasons of tight, compact, good television,” he said. “The more episodes you have, the thinner the episodes get. So I kind of dig that.”

The network did order a script for a possible Season 3 premiere, and Soderbergh even said last July he was still planning to do a third season. But with the last episode airing way back in December 2015 and cast members like Sullivan moving on to new projects, it seems safe to say The Knick is headed for the TV morgue.

Sullivan now stars as Kate’s boyfriend Toby on NBC’s hit family drama This Is Us, and he looks and sounds so different — clean-shaven, no Irish accent — that even The Knick fans don’t recognize him. But he still credits the Cinemax drama with kick-starting his acting career: “I was very proud of that show. And everything I’ve done since then is directly because of that show. So I’m very thankful to Steven Soderbergh and the whole crew.”

The Knick fans: Are you bummed there won’t be a Season 3? Or was it time to lay it to rest? Drop your thoughts in a comment below.