This season of The Walking Dead has been building towards a big ol’ showdown between Rick and Negan — and we might not have to wait until next season to see it.

“The end of this season is very much the end of a chapter,” showrunner Scott M. Gimple hinted to fans at Friday’s PaleyFest L.A. panel. No, he didn’t come out and promise us a Rick vs. Negan fight to the death, but he did say the April 2 finale will be the start of a new era for AMC’s zombie thriller: “It’s about setting up this gigantic, epic tale to come — not only in Season 8, but beyond.”

And “beyond” could mean another seven seasons, Gimple thinks. He noted that the Season 8 premiere will be the show’s 100th episode, and he teased that it’ll be less about celebrating that milestone and “more about setting up the next hundred episodes.” (Season 14, anyone?)

* Creator Robert Kirkman marveled at how vividly Jeffrey Dean Morgan has been able to bring the show’s big bad Negan to life: “[Negan] is this horrible person… but he has this spark to him that’s really engaging and really entertaining. And Jeffrey portrayed that so well… there’s a warmth to him even when he’s performing these horrible things. I don’t know how he pulls it off.”

* Andrew Lincoln (Rick) remembered shooting this season’s scenes where Rick lost the will to fight back against Negan as “a pretty miserable day at the office.” But he was emboldened by the courage of the writing, he says: “I thought it was such a brave thing to do: to smash a hero, an archetype. And I thought, ‘I’m gonna do it with everything I have… and be in a shame-free zone.'” 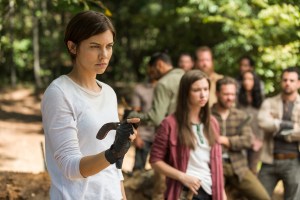 * Lauren Cohan (Maggie) said the baby that Maggie’s carrying is inspiring her to keep going, even after the brutal murder of Glenn at the hands of Negan: “What other reason would there be to experience such loss… than to have life inside you? You still have to survive. When you still have light to share, that’s just who you are. The more people she loses, the stronger the fire burns in her.”

* Josh McDermitt (Eugene) explained that Eugene has fallen in with Negan and the Saviors as a way to survive: “Eugene is scared. He’s trying to protect himself. And why not align yourself with the man who’s causing the most fear in your life?… Throughout the show, we’ve seen [Eugene] adapt and change. That’s how he survives. He lies and manipulates. He’s like a cockroach, man!”

* Seth Gilliam (Father Gabriel) hinted that Gabriel is doing his best to atone for his past cowardice: “He didn’t live up to his ideal of himself, and has to face that every day. He’s been able to go back and try to make up for it. He’s trying to prove that… he will be accountable for his actions. He’s not going to shrink from it.”