The promos for Thursday’s Grey’s Anatomy (8/7c, ABC) have already revealed that Jackson and April’s work trip to Montana reunites him with his long-lost father. But what they don’t reveal is how what transpires on that journey impacts Harriet’s divorced co-parents going forward. “At the beginning of the episode, there is so much tension between them,” Sarah Drew, who plays Dr. Kepner, tells TVLine. “They don’t have any real sense that they are going to work anything out [during their travels]. It’s not a nice, cozy vacation.”

However, once April learns that Jackson has found his dad (whose casting will remain a secret until airtime), everything changes. “She realizes from the beginning that something’s going on with him. He’s unusually cross with her — even in terms of their working relationship,” notes Drew. “So when she discovers that [the reason] is his father, it kind of opens up a world for her of, ‘Now everything makes sense’ — his attitude, his shortness, his shutting her out.

“Because this is a very deep and intense situation,” she continues, “it gives her more empathy and patience towards him.” 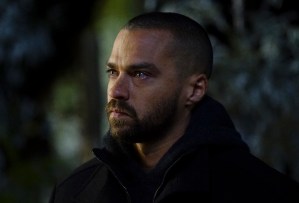 It also gives her a mission to accomplish: getting him to at last have it out with his father. “I love the way that scene plays out. She doesn’t say, ‘You need to go because you’re going through something, and I care about you and want you to figure it out,'” the actress previews. “No, she says, ‘You need to go because you can’t do your job right now, and I need you to do your job.’

“That’s really tough, and I don’t think it’s completely honest,” she adds. “I think [she does it] totally out of love, but she’s not going to let on that it is, because… that’s exactly what he needs to hear in that moment. She’s so firm and so strong. She’s really being a rock for him.”

So much so that, by the end of “Who Is He (And What Is He to You)?” the once-marrieds are closer than they have been in ages. “Regardless of where it goes from here,” Drew says, “there is a great healing that has happened as a result of this experience that I think would give Japril fans a lot of hope.”

What do you think, Grey’s fans? Would you like to see Harriet’s folks give it another go? Who do you picture as Jackson’s father? Hit the comments.