Fox is bringing a little law and order to its Friday night line-up.

The network on Thursday announced that new unscripted series You the Jury, which enlists viewers at home to vote on the verdict of civil cases presented live by six top attorneys, will premiere on Friday, April 7 at 9/8c. Fox News personality Judge Jeanine Pirro will serve as host. 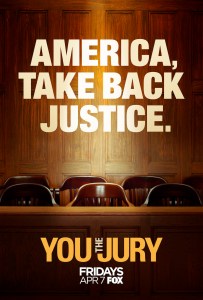 In each episode, the prosecution and defense — made up of attorneys Jose Baez (who defended Casey Anthony), Benjamin Crump (who sought justice for Trayvon Martin), Joseph Tacopina, Areva Martin, Mike Cavalluzzi and Charla Aldous — will argue their cases before former judge of the Superior Court of California LaDoris Cordell. Each case will touch on hot-button issues, such as online trolling, gay rights and religious freedom.

So how exactly will the voting process work? During the Eastern/Central time zone broadcast, viewers at home will have exactly five minutes to vote — via text and the FOX Now App — on a verdict, which will be presented live at the end of each episode. However, if the cumulative votes lead to a different verdict once West Coast votes are tallied, the original verdict will be overturned.

You the Jury will debut just months after NBC greenlit Law & Order: You the Jury — which is pretty much the exact same show.

Press PLAY on the promo below — which for some reason feels the need to make mention of “fake news” — then tell us if you’ll be tuning in for Fox’s live courtroom experiment.