Excuse the language, but NBC’s metaphysical comedy The Good Place dropped a forkin’ great plot twist on us in January’s Season 1 finale. In it, Eleanor discovered that she and her friends are actually trapped in a fake Good Place, an elaborate illusion dreamt up by Michael to torture them. (And Ted Danson’s wicked smile when Michael’s scheme was revealed will haunt us forever.)

In fact, it was such a great twist that creator Michael Schur had to work hard to keep it a secret. Stars Kristen Bell (Eleanor) and Danson “were the only other two people who knew,” Schur revealed to TVLine at an NBC press luncheon on Monday. “We kept all the other actors in the dark. Which I felt a little guilty about. But I think it was the right call.”

Bell even videotaped her castmates’ reactions when they learned the news about Evil Michael, Schur remembers: “You know when they started marketing horror movies by just shooting the audience at a test screening? That’s what it was like. Very shocked.” 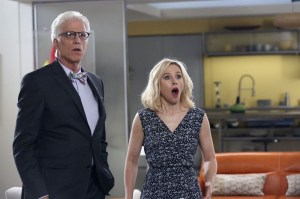 Since Danson knew about Michael’s evil intentions all along, did that change how he played Michael? “There was a lot of conversation about that,” Danson says, “realizing that you couldn’t end a shot on me in a private moment, because you would’ve seen my character [with an evil glint in his eye]. So it was always about the facade of what I was trying to convince them of.”

Even some of the show’s directors didn’t know, Danson adds, because he and Schur worked out a code to talk about Michael’s motivations on set. “We used acting terms: objective and super-objective,” Schur says. “The objective was what he appeared to be doing in the scene, and the super-objective was how that action would be torturing the people he was dealing with. If he wasn’t doing something that was torturing people in every second of every episode, then something had gone wrong. He’s failing at his job.”

NBC has renewed The Good Place for a second season, which means we’ll see more of Michael’s evil ways, Schur says: “The fun part of the last half of the finale for me was, you got to see Michael being a different way than he was, which is his true essence. So that’s the enjoyable thing about working on stories for Season 2: He’s a totally different guy than we thought he was.” 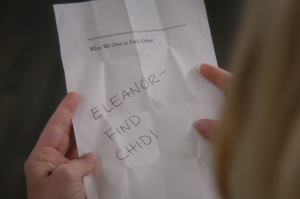 At the end of the finale, Eleanor’s memory was wiped by Michael, and she started over fresh in the Good Place… except she wrote herself a note saying “Eleanor — Find Chidi” and hid it in Janet’s mouth for herself to find. “Everyone has been officially rebooted” to start out Season 2, Schur hints. “But she wrote herself a note, which is the one thing that slipped through the cracks.”

If the note-leaving thing reminds you of Memento, you’re not the only one. “The original idea was that she writes it on her arm,” Schur recalls. “But then we were like, ‘He would either see it, or when she was rebooted, it would disappear.’ And then we remembered — totally by accident, mind you — we had written a joke that Janet couldn’t eat anything, so when she was rebooted, she smashed a piece of birthday cake around her face. So then we were like, ‘Oh, that’s how she does it!’ It was a happy coincidence.”

And being on a network show that bravely dives into deep discussions of ethics and morality has its perks, Danson says: “I have so many parents come up with ten-year-old kids who say, ‘My son and I, my daughter and I watch this, and we love it.’ And you realize that the whole morality story… it’s kind of fun to be a part of.”