At the end of the Valentine’s Day This Is Us episode, Jack ordered up a tall glass of trouble. Whether he’ll make it a double, star Milo Ventimiglia says, remains to be seen.

We’re talking, of course, about the recent scene that showed the Pearson dad drinking — after a long dry spell — following a fight with wife Rebecca. Ventimiglia tells TVLine that whether or not the alcoholic beverage is a one-time thing, it doesn’t bode well for their overtaxed marriage.

“If anyone can assume what that means symbolically, what that means in relation to Rebecca’s abhorrence of it, it spells danger and it spells problems,” Ventimigilia says. “But is Jack deserving of that moment to possibly take the edge off? Yeah, I think maybe he earned it.”

Thing is, as co-star Mandy Moore recently pointed out, nearly two decades of stay-at-home mothering has made Rebecca feel like she earned a chance to go on tour with her band. And in Tuesday’s episode (NBC, 9/8c), Mr. and Mrs. Pearson haven’t come to any easily resolutions about the feelings hurt in the Valentine’s Day hour. 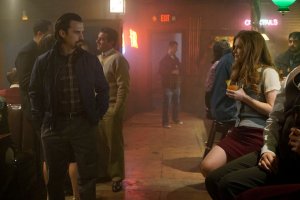 Then there’s a recently released photo (right), also from Tuesday’s episode, that show Jack and Miguel’s comely assistant, Heather, exchanging a look in a bar…

Ventimiglia deftly deflects the suggestion that perhaps the pair have an affair. “I think everybody wants to speculate and wonder what it is that could possibly pull Jack and Rebecca apart,” he says. “There are a lot of different things in life that pull any couple apart, whether it’s work or career or a spark with someone else. I think there are a lot of teasing elements that, of course, are going to be out there and questions that are going to get asked. I constantly tell people, ‘Just wait. All answers will come, probably pretty quick.'”

And as for the upcoming season finale, which airs March 14? “It’ll stress you the f—k out,” is all Ventimiglia will say, smiling.