Turner Classic Movies host Robert Osborne has died at the age of 84.

#BREAKING: #RIP Robert Osborne, the film historian who knew everything about the Oscars, and friendship. Mom & I will miss you. 😪 pic.twitter.com/zMfRqPk5bo

Osborne was the cable channel’s primary on-air talent since the network got its start in 1994. He introduced classic films to TCM’s audience, often speaking with major stars — including Carrie Fisher, Drew Barrymore, Angela Lansbury and Alec Baldwin — who co-hosted with him or were interviewed by him.

During his long career in Hollywood, Osborne was an actor (appearing in series like The Beverly Hillbillies) before parlaying his writing ability and showbiz interests into stints with outlets like CBS Morning News and The Hollywood Reporter. 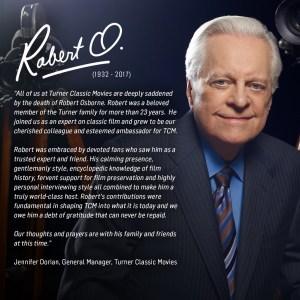