ABC’s Once Upon a Time returns from its three-month break this Sunday at 8/7c, with Emma and Regina stranded in the Wish Realm (and in the company of a familiar thief), while back home the Storybrooke heroes are aiming to get the drop on he who has come to snuff the Savior.

How will Regina cope with the “curve ball” she has been thrown? Why is Rumbelle’s rapidly-grown son feeling kill-y? And what will it take for both of Emma’s parents to get back in the game?

Those questions and many others are addressed in this hand-crafted amalgam of two recent interviews with Once co-creators Adam Horowitz and Eddy Kitsis.

TVLINE | What are you most excited for people to see in Season 6B, that hasn’t been talked about yet during the break?
ADAM HOROWITZ | That is an excellent question — and it is a tough question, because the stuff we’re most excited for people to see is the stuff that holds the biggest surprise. It’s that fine line of, “I’d love to tease some things,” but this is stuff that we’ve been cooking up for a long time, that we hope the audience shows up for an enjoys.

TVLINE | Is there, maybe, a shiny new set or set piece that is particularly cool…?
HOROWITZ | I’d say that there are places we will be returning to that we haven’t been to in a while.

TVLINE | What sort of “centric” episodes will there be in the second half?
HOROWITZ | We’ll be seeing a lot of our regulars. We’ll be seeing Snow and Charming, we’ll be seeing Hook…. We’ll also be seeing Young Emma again. We’re going to run the gamut.

TVLINE | And by Young Emma, do you mean beyond what we see in Sunday’s premiere? 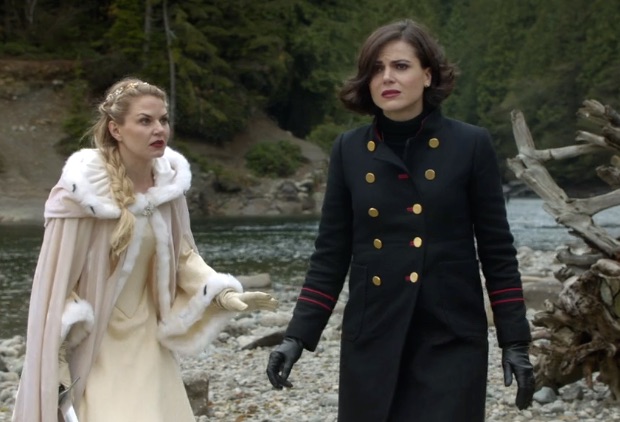 TVLINE | For Emma, what is now the bigger obstacle: creating a new portal, or getting Regina to leave this Robin and return home?
KITSIS | I would say this: Were in an alt-reality where Emma is partnered up with the person who killed the king and queen, so everyone including their own son is looking for them. Obviously Robin is a bit of a curve ball that no one was expecting, so a bigger obstacle than anything is that this is happening all at once. But I think that where we’re going in the second half is not where the audience thinks we’re going. 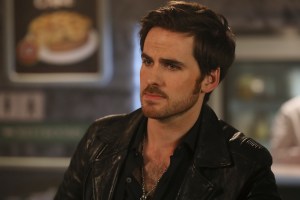 are Hook and the Charmings back home starting to get worried that the ladies aren’t back?
HOROWITZ | They’ve got their hands full. They’re very actively trying to figure out what to do about the more imminent problem they’re facing, which is there is a dark figure in a hood who has come to wreak havoc, who’s got their sights set on Emma. They believe Emma will be back — whether through the help of Regina or their own doing — and once she gets back, they want to make sure that for Hook that his love is safe, and for David and Snow that their daughter is safe. When we resume, there are multiple threads going on in multiple realms simultaneously. There’s a lot of action and a lot of angst.

TVLINE | Has seeing Emma live a princess’ life been on your “to-do” list?
KITSIS | We always got asked, “What would happen if Emma grew up without the curse?” So we thought it would be fun to see what would happen if Emma grew up in a place where there was no longer fighting, and we see that Bandit Snow and Charming now have become the overprotective parents who wouldn’t let their daughter get near anything. [Laughs] That was kind of the impetus for why Emma was the singing princess, the princess who had never seen a sword before. That was the idea we wanted to create, and then have Emma be able to see it, because while it is very much human nature to say “the grass is greener,” what you realize is that though the grass may seem greener, the truth is that what you’ve gone through is what makes you you.

TVLINE | So, what is Gideon’s beef? Why does he want to kill Emma?
HOROWITZ | A lot of what were going to be dealing with in the second half of the season is just that — why is he back? Why is he seemingly after Emma? In this vision that we’ve seen of her, what is motivating him?
KITSIS | “Why does he need to kill her?” is the real question.
HOROWITZ | We pick up in that scene [with Gideon, Belle and Rumple] and you get to see the rest of it. Both Gideon and Belle will articulate some of the questions that our viewers have, which is, “Why did he do this, where has he been, what has happened to him?” That stuff gets answered pretty quickly. 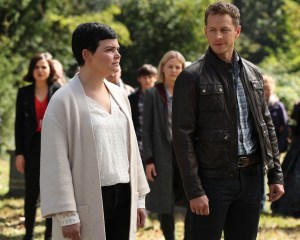 the Charmings doing about Sleeping Curse? Are they actively trying to solve it?
HOROWITZ | They’re watching lot of Ladyhawke.
KITSIS | Snow and Charming have a lot on their plate, and we’re going to see the toll that the Sleeping Curse takes on Charming, because toward the end of [Season 6A] it kinda looks like he’s sleep deprived, he’s going dark and off the rails. We’re going to see what happens when you take away his calming center. Without her around, and not much sleep, Charming can get into some real trouble.

TVLINE | To what lengths will David go to get Snow back?
KITSIS | He is going to go to incredible lengths. And it is not easy, it is not a “true love wakes you up” situation. It is not going to be wrapped up within the first couple episodes. Without Snow there to keep David in check, you’re going to see a sleepless David start to ponder about his father and what happened to him again.

TVLINE | Is that what brings us to Episode 12, “Murder Most Foul”?
KITSIS | Episode 12 is going to be the further adventures of one of my favorite bromances in the world, Hook and Charming, finding out who killed David’s dad.

TVLINE | What are your plans for Alan Dale’s return?
HOROWITZ | We love Alan Dale, and his character has been rotting underground in the dungeon for three or four seasons at this point, so it’s time to exhume him. But in all seriousness, it’s always fun to dip into Prince Charming’s past — and also seeing that relationship play out in the present.

TVLINE | When will the truth be revealed about Charming’s father?
HOROWITZ | By Easter, you should know a lot more.

TVLINE | Will undoing the Sleeping Curse require something physical — a magical widget, or a person — or is it something like “hope,” “trust,” “faith”?
KITSIS | It is a combination of all it it.
HOROWITZ | A “magical stew.”
KITSIS | There’s a lot of emotional upheaval coming the Charmings’ way, and what’s great is they’re probably the strongest couple in all fairy tale lore, so to see them handle the stuff being thrown at their family is fun to write, and fun to watch. 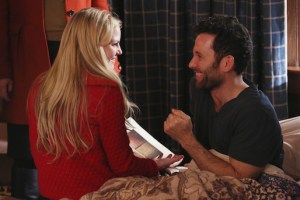 where and when do we see August again?
HOROWITZ | We love Eion Bailey, we love August, we love Pinocchio. We get to see him in multiple worlds and realms.

TVLINE | When will we next see Aladdin and Jasmine, and under what circumstances?
HOROWITZ | We are going to be seeing them under heroic circumstances — not immediately in the second half, but they’ll be back. We’ll be seeing Agrabah, and some of their adventures there.
KITSIS | And Jafar will be back in full force.
HOROWITZ | Oded [Fehr] is great, he’s been just so much fun to work with. He’s got a delicious take on the character.

TVLINE | I saw that you won’t say if Emma and Hook share a duet in the musical episode. But answer me this: Will anybody have a duet?
HOROWITZ | Yes.

TVLINE | And here’s a perhaps-answerable question about the engagement ring we saw in the 6B promo: Will anybody else learn of its existence before its ultimate recipient does?
HOROWITZ | Sauron will! [Laughs] We’re going to Mordor with the ring. I think the less said about the ring now, the better — other than it’s out there and somebody’s going to get it.

Want more scoop on Once? I will be visiting the set next week, so email InsideLine@tvline.com and your question may be answered via Matt’s Inside Line.