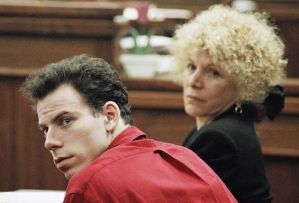 of the anthology series focuses on Lyle and Erik Menendez, brothers who were convicted in 1996 of murdering their parents and sentenced to life in prison without the possibility of parole. Abramson (right) represented the siblings through three trials.

“I’ve known Edie for more than two decades,” Wolf said in a statement. “Our working relationship started when she was among an elite group of actors who made multiple appearances as defense attorneys on Law & Order in the early ’90s. Edie was at the top of that list. She did a fabulous job on Law & Order and, as Leslie Abramson, will knock the role out of the park.”

Following her Emmy Award-winning turn on The Sopranos, Falco headlined the Showtime dramedy Nurse Jackie. Her other TV credits include Horace and Pete, 30 Rock, Oz and Homicide: Life on the Street.

As you may recall, another Menendez brothers project is in the works at Lifetime, with Courtney Love set to play mom Kitty Menendez.