MTV has revealed five new cast addiitons to The Shannara Chronicles, as production on Season 2 gets underway in New Zealand.

Jow (above left) will play Mareth, an unpredictable young woman with magical abilities, while Morgan (above right) will portray Lyria, a mysterious woman who is romantically linked to Baquero’s Eretria. 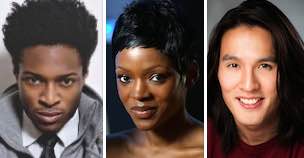 will play Garet, a sly and charismatic bounty hunter known throughout the Four Lands as “The Weapons Master”; Chikezie will portray Tamlin, the cunning queen of Leah, the only human Kingdom in the Four Lands; and Chiam will play Riga, a once revered general in the Eventine’s army, now the leader of an extremist group of Elvin soldiers known as The Crimson.

I understood 1/20th of what I just wrote. But here is more:

In Season 2 of the fantasy series, MTV tells us, the re-emergence of magic has the populace of the Four Lands terrified, and an organization called The Crimson is using fear and intimidation to sow discord among the races. Wil, scarred by the loss of Amberle and his separation from Eretria, has turned his back on his magical destiny to become a healer — until Mareth convinces him to rejoin the fight. After reuniting with Eretria, Wil and Mareth seek out Allanon, only to learn that Bandon is on a mission to resurrect a creature of darkest evil: The Warlock Lord.