Abby Scuito won’t be feeling a whole lotta love this Valentine’s Day when CBS’ NCIS and NCIS: New Orleans stage a two-hour crossover, as seen in these exclusive photos.

In the Tuesday, Feb. 14 episode of original-flavor NCIS, titled “Pandora’s Box, Part I” and airing at 8/7c, Abby’s (played by Pauley Perrette) homeland security think tank is compromised, after which she is found in possession of a bomb and subsequently cuffed and arrested.

When Gibbs’ team discovers that the leader of the group has been murdered and a “theoretical terror playbook” has been stolen, Agents McGee and Torres (Sean Murray and Wilmer Valderrama) travel to NCIS: New Orleans — at 10 pm, for “Pandora’s Box, Part II” — to partner with Agent Pride (Scott Bakula) and his team in the search for the volatile, missing playbook.

NCIS and NCIS: New Orleans both resume their seasons next Tuesday, Feb. 7. Will you then tune in for the Valentine’s Day crossover? 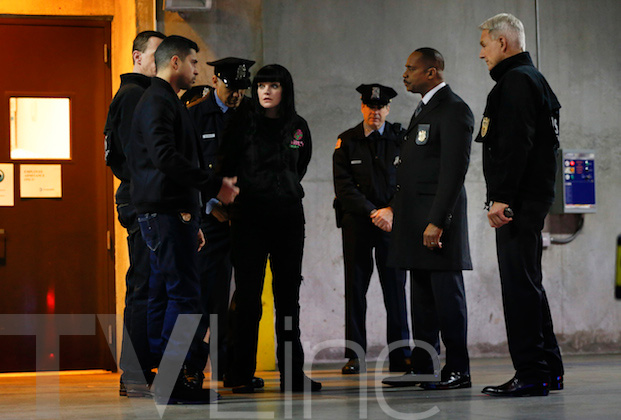