This week on The CW’s Arrow, Oliver & Co. reunited with dearly departed Laurel, before getting the full story on her improbable resurrection. Elsewhere, imprisoned Diggle got an unexpected lifeline and a familiar cry was heard at episode’s end.

Picking up where the fall finale left off, Oliver had so many questions for alive-and-well Laurel, and she more or less had answers. A short time after being declared dead, she saw a “white light” — in her time-traveling sister Sara, who teleported her to the Waverider to have her embolism fixed via next-gen tech. Having given Laurel the same “second chance” that was afforded her, Sara then deposited her sis in present-day Star City, to be with her loved ones.

After Laurel is quickly brought up to speed on her father Quentin’s tumble off the wagon and subsequent rehab, Felicity decides to throw a “homecoming” party (even though she technically still is mourning Billy, who hasn’t even been buried yet). At the quiet soiree, Oliver relishes the rare occasion that the team is brought together by non-dark times, by “miracles.” Felicity — having already registered some “weird” observations — privately has her doubts about this Laurel, and a preliminary DNA test allows for the possibility of an “evil twin.” Just then, Laurel herself gladly spills the beans, arriving with a sonic cry and shedding her charade as a “pathetic” “pill”: She is indeed from Earth-Two aka Black Siren. S.T.A.R. Labs security cam footage shows that the all-knowing Prometheus found and sprung her from the Pipeline, then coached her to taunt Oliver.

Later, though, Laurel-Two reaches out to Oliver, claiming that she was threatened into doing Prometheus’ bidding. Meeting up at the Black Canary statue, Oliver is rightly skeptical of the metahuman’s spin — she started going “dark” after Earth-Two’s Oliver, her great love, died 10 years ago — but he sees value in her offer to help them track down Prometheus. When Laurel-Two marvels at Oliver’s capacity for forgiveness, he relates what we soon learn is an adage from his Russia flashbacks, about how we can choose to let circumstance turn us into nectar, or poison.

Back at the lair’s holding cell, Felicity explains to Laurel-Two how Oliver sees in her a chance at redemption, especially in the wake of the devastating mind-fork that Prometheus pulled on him. Felicity then allows Laurel-Two to escape, having slipped nanite trackers into her drinking water — a ploy which, while savvy, spurs words between Oliver and his actual ex. When the nanites “go live” and Team Arrow chase Laurel down, she expectedly leads them to Prometheus. A group fight ensues, and Oliver must ultimately choose between dealing with Prometheus or saving Felicity from Black Siren. He choose the latter, challenging his ex-love’s doppelgänger to salvage any remaining good part of her self, by sparing Felicity.

Black Siren laughs off the sentiment and starts screaming Olicity to death, until Curtis silences her with some new tech. After Black Siren is shipped off to the ARGUS facility in Central City, Oliver resolves to keep his deathbed promise to the real Laurel, to find someone new to carry the Black Canary mantle. Turns out, his search may have started without him, when at a Hub City watering hole, two drunk bros find their obnoxious come-ons rebuffed (and then some!) by an attractive barfly’s… Canary Cry?? (Get scoop!)

* After looping Dig in on the Laurel sitch, Oliver tasked DA Adrian Chase with reversing his former bodyguard’s incarceration. Chase questions his ability to do so (as well as the propriety of it all), but at the very least he gets Dig’s transfer delayed, seeing as General Walker is itching to off the prisoner.

* Curtis was in a deserved funk, given Billy’s death, Evelyn’s betrayal, Prometheus continuing to elude them and husband 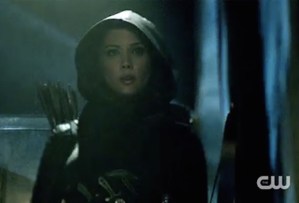 Paul walking out on him.

* In flashbacks, Oliver got roughed up (and fed psychobabble) by the Pakhan who betrayed his Bratva brothers — until he was rescued, by Talia al Ghul (Andromeda‘s Lexa Doig). “Hello, Mr. Queen. I’ve been looking for you.”

What did you think of the episode “Who Are You?”