Friday’s Girl Meets World series finale (Disney Channel, 6/5c) is a perfect example of that age-old idom “prepare for the worst, hope for the best.”

When the episode was filmed in July 2016, the network hadn’t officially decided whether the show would return for a fourth season, forcing the writers to get a little creative. 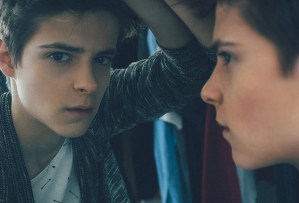 “We shot it so it could pass as a finale if we needed it to be,” Corey Fogelmanis (aka Farkle) tells TVLine. “We wrapped the season with that thought in the back of our minds.”

Series creator Michael Jacobs explains, “We signed up to do four years. Whatever Disney Channel’s business model is, we always tailored the show for four years. We wanted to basically do the seven years of Boy Meets World in four years of Girl Meets World. We had some really wonderful plans for the fourth season. Knowing there was a possibility that it could end, we came up with ‘Girl Meets Goodbye.'”

Part of that “goodbye” involves the show’s largest reunion of original Boy Meets World cast members yet — hey, somebody has to help Topanga decide whether or not to move the family to London — including both actresses who played Cory’s sister Morgan: Lily Nicksay (Seasons 1–2) and Lindsay Ridgeway (Seasons 3–7).

“It was really exciting having the Morgans on the show,” Fogelmanis says. “Not only was it both of them, but this was [Morgan’s] first episode [of GMW], so it was cool getting to watch them reunite with everybody else.”

There’s also a special moment in which a potentially London-bound Riley has a heart-to-heart with Farkle, as the two rehash their own somewhat complicated history. Looking back on the characters’ relationship, Fogelmanis says he’s glad that Farkle found Smackle, and that his character is better off as Riley and Maya’s friend: “Not every relationship between a guy and a girl has to be romantic.”

As for whether Fogelmanis would return to Girl Meets World, should it be picked up for a fourth season elsewhere — which remains a possibility, according to Jacobs — he says it would need to be a group decision: “I’d want to make sure everyone else would come back. I’d want to continue it as it was going. We really got into a groove there.”

“Hopefully there’s another venue out there that realizes theres an audience that loves this,” adds Jacobs. “There are many stories to tell. Maybe there’s an incarnation where we can do this and get both the old audience and the new audience. The last thing we’d want to do is overstay our welcome, but I think we died prematurely here.”

What are your hopes for Friday’s finale? Do you think the show deserves to continue elsewhere? Drop a comment with all of your thoughts below.