You know how they say when a stand-up comedian is failing miserably, he’s “dying”? Well, Showtime’s new dramedy I’m Dying Up Here knows all about that feeling.

Set to the groovy tune of “Blinded by the Light,” the first trailer for the upcoming series, set in the stand-up comedy scene of 1970s L.A., delivers just as much angst as it does laughter. And it comes courtesy of a guy who lived through it: Mega-star Jim Carrey, a stand-up veteran himself, is an executive producer.

In the trailer, we see shots of bright neon signs all over the streets of L.A. as a comedian played by Captain America‘s Sebastian Stan tells Cassie (Bad Teacher‘s Ari Graynor): “Figure out what it is that you have to say… get your ass out on that stage and say it.” Cassie’s one of a group of friends struggling to make it in Hollywood’s cutthroat stand-up scene… and it ain’t all a barrel of laughs. 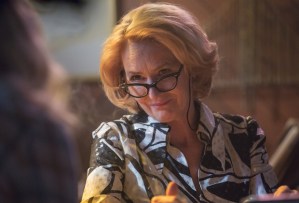 The action centers on a fictional L.A. comedy club owned by Goldie, played by Oscar winner Melissa Leo (The Fighter), where the young comics fight for stage time. Goldie has valuable showbiz contacts that could give their careers a boost, but she’s not afraid to dole out some tough love: “That volatility, that pain… that’s the price of brilliance,” she says.

More highlights from the trailer:

* Eddie (The Knick‘s Michael Angarano) facing off against a foul-mouthed heckler — and shushing a too-enthusiastic lover. (He has roommates, you know.)

* Edgar (The Daily Show‘s Al Madrigal) reminding us that the ’70s were an era of not-exactly-PC humor: “‘Mexican’ is a dirty word. Say ‘Mexican’ before anything… it sounds bad. ‘Took my kids to the circus… the Mexican circus.'”

* Bill (Mixology‘s Andrew Santino) giving a drunken “2:30 in the morning pancakes speech” about what it takes to succeed in this business… and promptly getting laughed off by his pals.

Plus, the cast of I’m Dying Up Here boasts a deep bench of comedic talent, including Kroll Show standout Jon Daly, Workaholics‘ Erik Griffin and Stephen Guarino, aka Derrick (“Dramaaa!”) from Happy Endings. So even if the comedians’ jokes aren’t funny, we know the cast is.

No need to shell out for a two-drink minimum: I’m Dying Up Here debuts Sunday, June 4 at 10/9c on Showtime.

Press PLAY on the video above to watch the trailer, then hit the comments with your first impressions. (No heckling, please.)