As HBO’s Girls gets ready for its final season (Feb. 12, 10/9c), one of the biggest lingering questions is: Which boys do these girls find themselves paired off with?

It’s a bit more complicated than that, of course, as we see in the just-released Season 6 trailer (which you can watch above). For one thing, Marnie’s not exactly “paired off.” She’s sleeping with Ray again, but she’s still with Desi, too, and… um, trying new things with him. (We’ll let Hannah and Elijah explain that one.)

Jessa’s forbidden romance with Hannah’s ex Adam is still running hot, but Shoshanna and Elijah still don’t approve… and no one can agree on who exactly is the “grown-up” in this situation. (Spoiler alert: probably none of the above.) 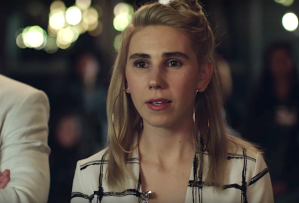 We don’t get a look at Shoshanna’s dating life, but we do see her gazing at young girls like herself with plenty of money and good careers and thinking, “Those are not my friends.” And we’re not the only ones still thinking that she and Ray are endgame, right? (Quit ruining Ray, Marnie!)

Lastly, Hannah’s alone and a bit lost — as usual. But she does renew her passion for writing, as we see her meeting with a magazine editor played by Brooklyn Nine-Nine‘s Chelsea Peretti and telling her: “I don’t give a s–t about anything, yet I simultaneously have opinions about everything.”

But in typical Hannah fashion, even that doesn’t come easily. When Peretti’s character suggests she do a story about surfing, Hannah quickly says yes… but then offers a long-winded caveat that begins with, “I do feel like I need to warn you that I hate, and am maybe allergic to, sand.” Yep, there’s the Hannah we know.

Press PLAY on the video above for a sneak peek at Girls‘ final season, then hit the comments with your predictions for all four girls.